Pythium is a large class of water molds, several of which are plant pathogens. They can infect plant roots, causing root disease and crown rot in plants or damping-off of seedlings. As water molds, they prefer wet growing media and commonly attack plants that are stressed from overwatering.

“One of the best ways to prevent Pythium from attacking is to allow crops to dry out between irrigations and to minimize plant stress.”

Plant disease clinics have identified over 120 species of Pythium that have infected plants. According to Gary Moorman (Professor Emeritus of Pathology, Penn State University) and Margery Daughtrey (Senior Extension Associate, Department of Plant Pathology, Cornell University), the three most common Pythium species that cause disease in greenhouse crops are:

Knowing which species of Pythium is infecting a crop can make a difference when it comes to disease control strategies.

Pythium aphanidermatum is one of the most aggressive Pythium species. It has a swimming zoospore that moves freely from an infected plant through the irrigation water to another plant, making this disease spread easily in ebb-and-flood systems, flood floors or even from recycled pond water. It prefers the hottest air temperatures of the three common Pythium species. The minimum temperature at which it can grow is 50°F (10°C), but it becomes more active above 77°F (25°C), with the optimum being 95-104°F (35-40°C). Due to its preference to heat, it is more likely to occur in bedding plants later in the spring season, fall mums, as they are grown mostly during the summer, and early in the poinsettia production cycle.

Pythium ultimum is a common soil inhabitant and was more prevalent when field soil was incorporated into growing media. Although it has been identified as a common pathogen, research has shown it is not as common as once thought.  It rarely produces swimming zoospores, so it is less likely to be transferred by water. It can tolerate the coldest temperatures of the three Pythium species and therefore is active when other root disease pathogens are not. The minimum temperature at which Pythium ultimum will grow is 41°F (5°C), but it is typically active at temperatures below 68°F (20°C). Its optimum temperature for growth is 77-86°F (25-30°C) and it cannot tolerate a temperature of or above 95°F (35°C). It typically infects spring bedding plants early in the production cycle and may infect poinsettias at the end of their production cycle. 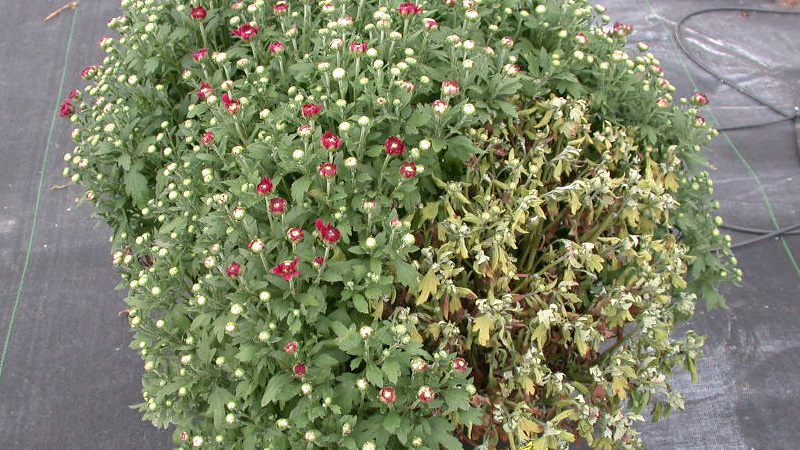 Figure 1. This mum has a Pythium infection due to stress from high fertilizer salts and overwatering. Since the outdoor growing environment was hot, the species of Pythium was Pythium aphanidermatum. Source: Premier Tech

Host Preferences of Each Pythium Species

Although there are several plants that can be infected by all three Pythium species (e.g. poinsettias and mums), some plants are only parasitized by one or two species, such as vinca and zinnias.

Below is a listing of greenhouse crops that are known hosts of each Pythium species. Please note that as additional documented cases of Pythium infection come through disease clinics, more plants may be added to each list.