We often think of water quality from the standpoint of chemical properties, such as alkalinity, mineral elements, pH, etc. This information is important when determining acid injection rates and for selecting fertilizers that work best for a specific water source, but there is more to water than chemical properties. Water has suspended solids, such as sand and soil, and if the water is recycled, it can contain peat moss and growing medium. Water also has a biological component that includes many types of bacteria, fungi, algae and other organisms. Most of these microorganisms are benign or in some cases beneficial to the plants, but some may be plant pathogens, such as Pythium. Therefore there may be a need to sanitize irrigation water in order to eliminate root disease pathogens, especially with recycled water as well as pond, river and lake water.

Before water can be sanitized, the total suspended solids, water chemistry and biological load in the watering system have to be considered. These impact the efficacy of sanitizing agents and sanitation systems; therefore, a water source may require pre-treatment to adjust these properties so a water sanitation system has maximum impact on waterborne pathogens. 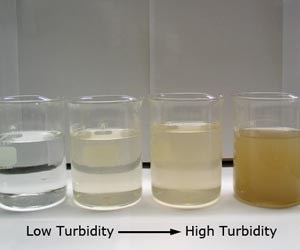 “Total suspended solids are particles that float in the water
and can vary by water source. Source: www.watermag.ro/blog”

Suspended solids cloud water, reducing clarity and light transmission. This is a problem if water is being sanitized with UV radiation. If the radiation does not reach sections of the water, it will not be sanitized. As a guideline for using UV radiation for water sanitation, water should have a UV transmission rate of 75% or higher.

Chemical Properties: The chemical properties that influence the efficacy of some water sanitation systems include pH and soluble salts. The pH of the water should ideally be below 7.5 as it can reduce the activity of chlorine generated from chloride injectors and solubility of copper from copper ionization units. Water with a pH above 7.5 will require injection of higher rates of chlorine or copper to compensate for tie up due to the high water pH. A better solution is to inject acid into the water to reduce its pH to 7 or lower, so there is little tie up. Even water sources with very low alkalinity (<50 ppm CaCO3) can have a pH above 7.5, and yes, acid injection is still needed to reduce water pH when using chlorine generators or copper ionization units.

The amount of soluble salts in the water also influences the effectiveness of copper ionization. If the electrical conductivity (E.C.) of the water is below 0.2-0.3 mmhos/cm, too few copper ions are generated by a copper ionization system to attach to and kill pathogens, algae and other microorganisms. If a water source can have E.C. drop below 0.2-0.3 mmhos/cm, then find systems that can accommodate these drops or consider using ionization plates with larger surface areas.  Also consider that as water E.C. fluctuates, it affects copper output. The more the water EC fluctuates, the more inconsistent the delivery of copper will be.

If the soluble salts in the water are high (>1.0 mmhos/cm), they use up oxidants, such as chlorine, activated peroxygen, ozone, etc., making them ineffective. Therefore, higher application rates of oxidants have to be used to effectively sanitize water.

Biological Properties: Water contains bacteria, algae and fungi. Not surprisingly, this microbial load is very high in recycled water as well as water coming from pond, river and lake sources. Well and municipal sources have lower microbial loads. If water has a high microbial load, then it can lead to rapid build-up of biofilm in water lines, spaghetti tubes and emitters, which can clog them. Biofilm also serves as a “reservoir” for algae and other microorganisms that can quickly populate the walls and floors of the greenhouse as well as the growing medium surface. 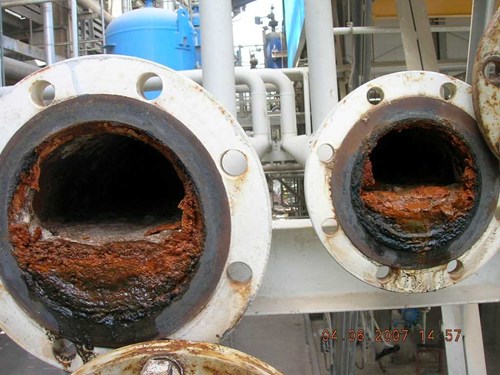 “Biofilm inside pipes contributes to the biological load in a water source.
This film should be removed in order to increase the efficacy of water sanitizing agents.
Source: www.merusonline.com/biofouling-refinery”

The bottom line is that in order for water to be sanitized, it often needs to be pre-cleaned first, depending on the sanitation method. The first step for most sanitation systems, if needed, is to reduce total dissolved solids through filtering the water. Measure the total dissolved solids and, if you are using UV radiation to clean the water, also check the UV radiation transmission through the water. If this is not sufficient, then more filtering is required. Next, check the pH of the water; it is best for it to be below 7.5. Last, if the water has a high microbial population, you may need to “shock” (chlorine treatment) your irrigation system to remove the biofilm that may have built up.  This will help reduce overall microbial population.