Concerns of Ethylene in Greenhouse Production

Ethylene is a colorless, odorless gas composed of two carbon and four hydrogen atoms (C2H4).  It is a naturally occurring plant hormone that acts as a chemical signal that controls several aspects in plant development and growth. In most plants, it is involved in flower senescence, fruit ripening and seed germination.

Ethylene can also occur in the greenhouse as a gaseous contaminant. Levels above 0.1 ppm are known to cause injury to plants during production, handling, shipping and storage (i.e. post-production). Symptoms of ethylene damage include foliar chlorosis or necrosis, drooping of leaves and poinsettia bracts, rapid flower aging and wilting, malformed leaves or flowers, pre-mature dropping of leaves or flowers, and stunted growth. Plants vary in response to ethylene, not only among different plant species, but even among plant cultivars of the same species. A plant’s response depends on the ethylene concentration, length of exposure, sensitivity of the plant species and stage of plant life cycle. Greenhouse temperature also plays a role; higher temperatures are known to have a greater impact on the plant.

The most common source of excess ethylene in a greenhouse is from heaters that are not functioning properly or are insufficiently vented. Other sources of ethylene may include: exhaust from combustion engines (equipment powered by propane), leaky gas lines or contaminated fuel, cigarette smoke and decaying plant material. Most often, when there is an elevated level of ethylene, there will also be elevated levels of carbon monoxide, which can be very dangerous to humans. 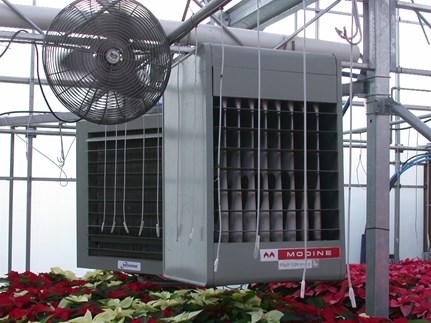 Check heater to make sure it is working properly to minimize possible ethylene production in the greenhouse. Source: Premier Tech. 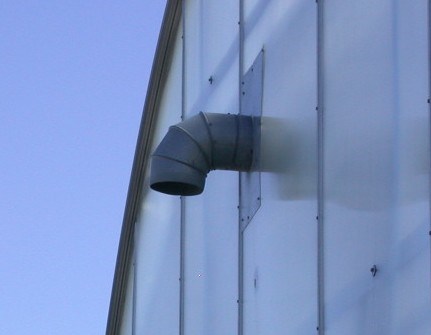 Make sure exhaust vents are not clogged and have proper flow to allow heater exhaust fumes to escape from the greenhouse. Source: Premier Tech.

One of the best-known ways to determine if you have ethylene contamination in the greenhouse is by growing “indicator plants” that are known to be sensitive to ethylene. These would include tomato, Gypsophila (baby’s breath) and Cuphea. A second and more reliable method to detect ethylene levels in the greenhouse is by sending an air sample into a reliable commercial or university laboratory for analysis. Once a laboratory is selected, contact them about the details of their program and the instructions for collecting an air sample.

If an ethylene problem is detected, one of the quickest and easiest methods of reducing the effects of over-exposure is periodic ventilation of the greenhouse with outside air. This is only a short-term fix and should not be used as a long-term solution to the problem. Identify the source of the ethylene contamination and take the appropriate measures to fix the problem. One of the major keys in preventing ethylene damage to greenhouse crops is to be proactive.

Keep a watchful eye on your plants for irregular growth and know the symptoms of ethylene contamination for your crops. An annual program and a watchful eye will go a long way in reducing contamination risks and major crop damage during the busy production time of the year.