Cause of pH Drop in Geranium

Plants and micronutrients in greenhouses

In their native environment, iron-efficient plants grow in soils with few micronutrients, so they had to adapt in order to obtain what few micronutrients were available. The iron-efficient plant group is able to easily take-up iron and manganese; however this can be a problem in the greenhouse growing environment where many other crops have difficulty obtaining iron and manganese from the growing medium.

Today’s fertilizers are designed to accommodate the micronutrient needs for a wide range of plants, so micronutrient levels may be high for geraniums. However, this depends greatly on the pH of the growing medium. Iron and manganese are more soluble at lower pH levels, making them more available to the plant. Toxic levels are easily reached in the tissue of iron-efficient plants if the pH of the growing medium falls below 5.8; therefore, the ideal pH for these plants is 6.0-6.6. 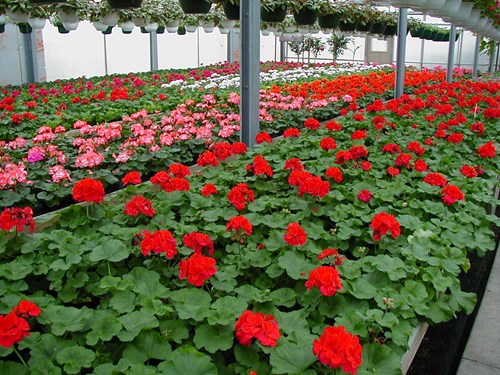 It is generally understood that when fertilized with an ammonium based fertilizer, plant roots exchange acid ions for the ammonium ions, which causes a general decrease in growing media pH. This is also true of urea, which microorganisms in the growing medium convert into ammonium. Geraniums also release acid ions when taking up ammonium, but they are unique in that they will also release acid into the growing medium if they are deficient in phosphorus. Most water soluble fertilizers used in the greenhouse tend to be fairly low in phosphorus, compared to nitrogen and potassium.

This process of acid release caused by low phosphorus is called hyper-release and can happen very quickly and result in a pH drop of as much as 2.0 units. Symptoms of iron-manganese toxicity show up on the oldest leaves as brown speckling on the leaf edges. Eventually the whole leaf edge turns brown and progresses inward towards the leaf petiole. Damage to geranium foliage from iron and manganese toxicity will not correct itself once the pH of the media has been corrected. Damaged leaves will need to be removed and new foliage must be grown. 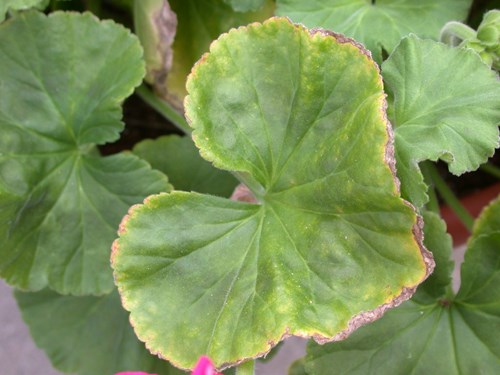 Symptoms of iron-manganese toxicity can be seen in this geranium’s lower leaves as a brown leaf edge. Source: Premier Tech. 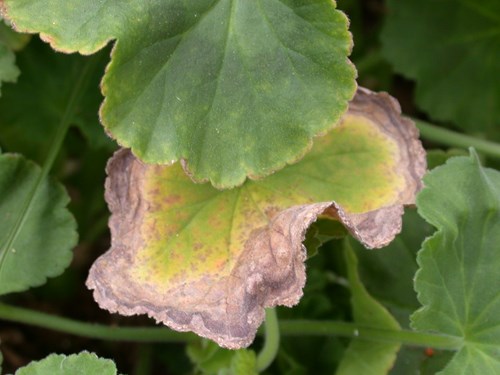 Symptoms of iron-manganese toxicity have advanced from the leaf edge and are moving towards the center. Source: Premier Tech.

It is not recommended that geraniums be fed with a high rate of blended fertilizers because they often have high rates of micro-nutrients, which can be at toxic levels. Use fertilizer with a higher percentage of nitrate nitrogen (>70%) in comparison to ammonium plus urea (<30%). Also try to avoid using very low phosphorus fertilizers as they exacerbate iron-manganese toxicity in geraniums.

To avoid iron-manganese toxicity, a grower should monitor growing media pH on a regular basis. Action must be taken quickly if the media pH starts to drop below 5.8. These steps include changing to a more basic fertilizer and in extreme cases, applying additional limestone, either as a liquid drench, or a top dress.

As with all crops, growers should monitor their water alkalinity, fertilizer levels and growing media pH on a regular basis. Geraniums can be beautiful and profitable for growers if iron-manganese toxicity can be avoided.