Tips for Efficient Energy Conservation in a Greenhouse

As the fall approaches, the days get shorter and shorter. This is the time of the year where our free energy source, sunlight, becomes limited. Sunlight is essential to maintain the global temperature in the ranges appropriate for plant growth. In winter, plant production is challenging because temperature and solar radiation decline to their minimum values.

In addition, there are several cloudy days which further diminish photosynthesis. Nevertheless, greenhouses are designed to minimize the negative effects of those environmental constraints. As winter approaches, the need for heating increases. The energy consumed to heat a greenhouse can be as high as 80% of the total energy required to run a greenhouse business.

There is almost twice the amount of solar radiation energy received in Queretaro, Mexico, than in New York, and as a result we can expect lower temperatures and greater heating costs in New York than in Queretaro.

The heat loss or gain in a greenhouse occurs in 4 different ways: conduction, convection, radiation and infiltration.

In order to fully understand the different ways to save energy for heating, it is essential to study how to conserve energy. Here are some strategies:

It is a fact that single-layer coverings lose more heat than double-layer coverings. Each covering material has different heat transfer values. In greenhouse agriculture, the units used to measure the amount of energy to heat or cool a pound of water by one degree Fahrenheit is called the “British Thermal Unit” (BTU). To demonstrate the energy loss differences, let’s assume there are two greenhouses: one with single-layer polyethylene and another with double-layer polyethylene.

The outside temperature is 20˚F (-7˚C) and the inside is maintained at 60˚F (16˚C) during the night. The energy loss through the single-layer polyethylene would be 335,000 BTUs, but for the double-layer polyethylene, it would be 200,000 BTUs. By using polyethylene with infrared barrier and anti-condensation surface treatment, heat loss can be further reduced.

Selecting Greenhouse Type Based on Heat Loss: Single-Bay vs. Gutter-Connected

Insulation materials can be placed at the base of the walls of the greenhouse (even below the surface of the soil) up to the plant height. The insulation material can be as simple as extruded polystyrene.

The infiltration rate for a greenhouse is measured as air exchanges per hour. A new greenhouse with glass covering will have 1.5 times the amount of air exchange per hour when compared to a double-layer polyethylene film. An “old construction” glass greenhouse in good condition typically has twice the amount of air exchange per hour compared to a new glass covered greenhouse and four times more if the “old construction” glass greenhouse is in poor condition. It is impossible to avoid infiltration, but it is possible to minimize it by sealing holes to the outside and by tightly closing vents, louvers and doors. 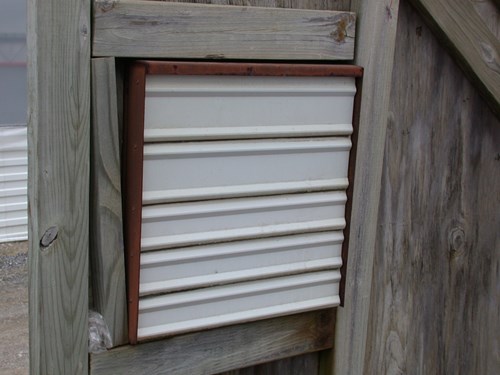 It is recommended to install windbreaks around the greenhouse facility. The windbreaks can be conifers or evergreen trees, although with anything that is used, they must be placed at a certain distance to avoid shadows especially during winter on the south side. The windbreaks serve as a physical barrier for the wind, decreasing air velocity and subsequent air infiltration.

On a clear night, heat energy is lost rapidly from the earth into space via long-wavelength radiation. On the other hand, energy loss diminishes during a cloudy night because the clouds trap long-wavelength radiation, serving as a natural blanket. Likewise, energy blankets or curtains installed in greenhouses serve to reduce heat loss at night. They are installed just below the gutter and are retractable so they can be closed during the night and retracted during the day. When closed, there is less volume of air to heat and the long-wavelength radiation bounces back to the leaves of the plants and other surfaces. During summer, the energy blanket can serve as a shade, thus decreasing the heat load in the greenhouse. Energy curtains are often made from aluminized polyester and, depending on how they are woven, may be porous, semi-porous or impervious to moisture. 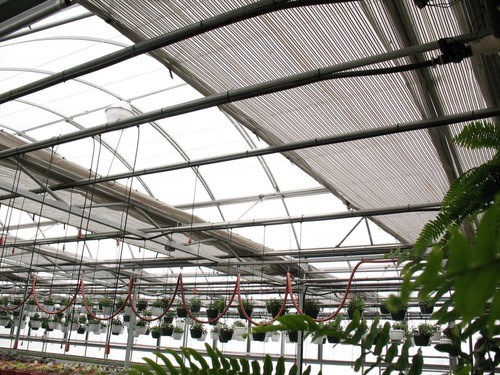 All the tips listed above are aimed at making your greenhouse more energy efficient. Although it is easier to save energy if the greenhouse is properly designed from the beginning, making a few changes may be worthwhile for the planet, and they will definitely be good for you and your crops. Since saving energy also means saving money!

To learn more about best practices for heating a greenhouse, read this: Heating Systems for a Temperate Greenhouse