Influence of Watering Technique on Disease & Other Root Zone Problems

Watering techniques have a major influence on crop quality and several crop production concerns. Not only does it affect crop growth rates and uniformity of crop dry down, but also contributes to root disease problems, algae growth on the growing medium surface and soil inhabiting insect populations. The saying is quite true, “The person who holds the hose holds the profits”. So how can adjustments in watering techniques reduce problems in your crops?

Most plant pathogens require moisture in order to infect and attack plants. However the water molds, Pythium and Phytophthora require the growing medium to be very wet, especially in the upper half inch, where their spores can germinate and infect plant roots. Allowing the growing medium surface to dry out until it turns a tan color before each watering, reduces the likelihood that the spores will germinate and any fungal growth is reduced due to lack of moisture.

Watering crops shallowly and frequently in order to avoid saturating the growing medium, can potentially keep the growing medium surface saturated more often, creating the ideal environment for Pythium and Phytophthora. This is especially true when germinating seeds, during propagation and during cloudy, cool conditions. Also plants that dry out unevenly are at risk. Since dry plants dictate the frequency of watering, the wet plants will also receive too much water, stay wet and have ideal conditions for Pythium and Phytophthora infection. 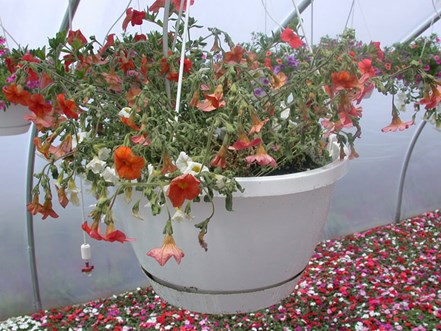 Algae can be found growing anywhere where there is light, nitrogen and water. The first two cannot be taken away without affecting plant quality, however, the moisture can. It makes sense if the growing medium surface is wet, algae grows.  Algae do not harm plants, but is unsightly and attracts fungus gnats and shore flies. Algae growth starts as a thin layer of green on the growing medium surface. If conditions do not change, the layer thickens and turns black making the growing medium surface look wet. As a result, the container is not watered; the algae layer dries up, dies, curls up and forms a water impenetrable layer.

Algae can effectively be controlled on the growing medium surface by allowing growing medium to dry out until it turns tan color.  Watering is a powerful tool in controlling algae.

If the growing medium dries out as mentioned above, this will greatly reduce food sources (especially for shore flies), reduce egg hatch and create a less favorable environment for the larvae. Drying out the growing medium is effective at controlling shore fly populations, but not as effective for fungus gnats. In the later case, insecticides may be needed for complete control of fungus gnats.