The use of sphagnum peat moss as a component of horticultural growing media has been very important because of the unique properties of the sphagnum cells to hold and release water.

The sphagnum cells are thin-walled cells with large cavities and their function is to absorb and transport water. An important characteristic of the sphagnum cells is that they have lignified walls in the form of rings, spirals or plates. These prevent the cells from collapsing when they dry out. By keeping peat suitably wet, optimum conditions of moisture and aeration can be maintained.

The functions of a growing medium are: a water reservoir for plant uptake, a nutrient holding/exchange system, a place for gaseous exchange for root systems and an anchor point for a plant's roots.

What are the effects on growing media?

Most growing media contain 60 to 80% of total pore space. The grade or particle size of the peat moss influences the amount of pore space in a soilless growing medium.

This type of peat has maximum air porosity over the other grades and the highest water retention. However, it tends to dry out faster than the other grades of peat because the peat packs loosely in containers, allowing water vapor to escape from the growing medium.

Due to its higher air porosity, plant roots can obtain oxygen more easily for maximum growth rates, further using up water from the growing medium and causing it to dry out more rapidly than growing media with finer peat moss. Coarse-fibered peat moss is usually blond in color with little or no peat dust associated with it. It typically can have some small amount of tree roots (often called sticks) that are naturally present with the peat moss and are not all eliminated during the screening process in order to maintain a good quality peat fiber. 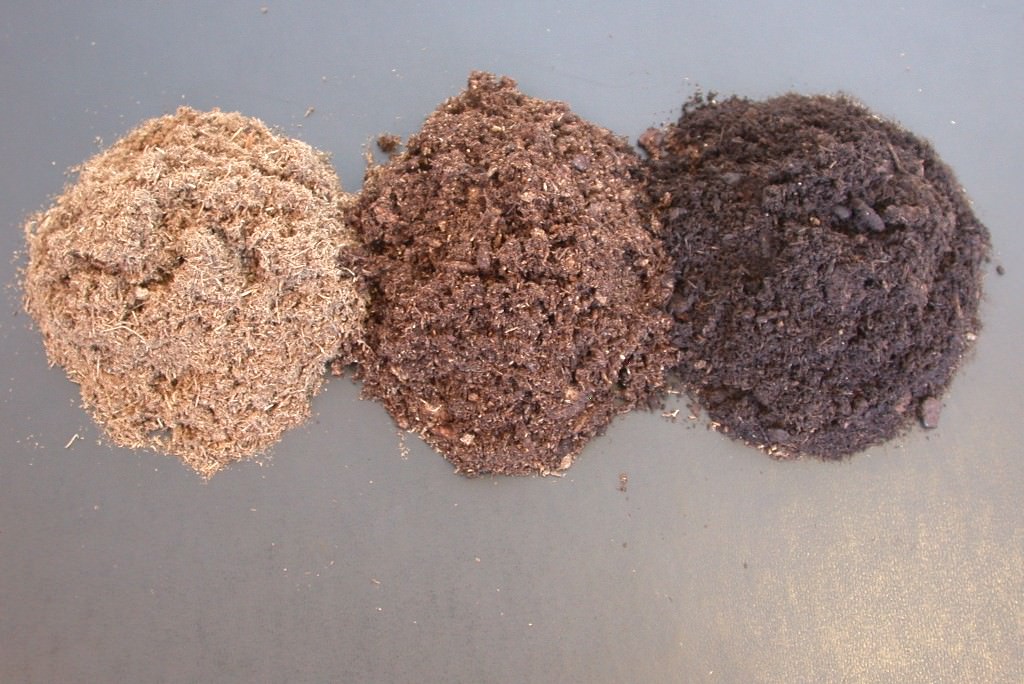 This picture shows different types of peat based on the degree of decomposition. The peat on the left is grower grade, middle is consumer, and the one on the right is almost black peat. Each type of peat fulfills unique needs in different market segments. Source: Premier Tech

Short fiber or fine peat moss is generally blond to slightly brown in color and is screened out of “Grower Grade”. Peat fines are used in growing media for small cell propagation, seed germination and plug production.

This is often seen in the compressed bales at garden centers and mass merchants. The peat is more decomposed than grower grade peat and has a brown color, with short fiber length. It looks similar to coarse peat as it still has decent fiber, but does have slightly lower air porosity and water holding capacity as well as a little higher bulk density than fine peat moss.

Since consumer peat is a little more decomposed, it will dry out slightly slower than coarse peat. This makes it better for use in consumer growing media, as the consumer generally does not water frequently, or it can be incorporated directly to condition garden soils.

Black peat moss is a highly decomposed, very fine particle size peat that is usually used  for soil amendments. Since the fibers are almost non-existent due to complete decomposition, the fine particles in black peat pack tightly together. This limits air flow, which limits movement of water vapor, causing this type of sphagnum peat moss to dry out very slowly between waterings.

Mushroom casings material is produced with this type of peat and will have a high bulk density, fairly high water holding capacity and a low air porosity. As the name suggests, it is usually black or very dark in color and has a very distinct smell. It is most often blended with other grades of peat for producing growing media because it has a particle size too small or decomposed to be used alone.

In summary, the grade of sphagnum peat moss used to produce soilless growing media will greatly influence the bulk density, water holding capacity and air porosity which will determine the use of growing media in plant production.

It is important to choose a soilless growing medium with the correct physical properties for the needs of the crop to be produced. Successful growing is a result of the proper choice of a growing medium and the actions of the grower.