PDF version of this text: Nursery Crops and Bark Media 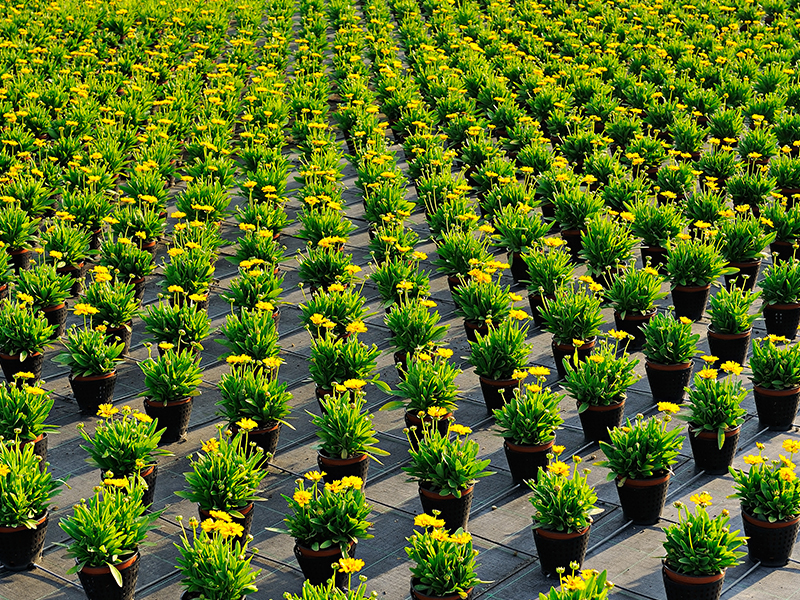 With all the new trends in horticulture, container-grown ornamentals remain an important crop in the industry. The number of plant species grown in containers has increased, from trees to shrubs, ornamental grasses and perennial plants. All these crops have long production cycles and some can last more than two years.

This longer production time, in comparison to greenhouse annuals, requires different growing practices and needs throughout the production cycle. There are several factors to consider when growing long-term containerized crops:

Nursery containers are diversified and have been designed for the needs of all types of crops, including perennials, fruit trees and small shrubs and trees. Trees and shrubs grown in containers are easier to manage versus growing them in the field. Container manufacturers provide features in their product offering such as coating the inside of the containers with copper or putting air holes in the sides of the pots, both of which promote root pruning which limits root coiling. Quality container-grown crops must have limited root coiling so the plant does not become pot-bound and incapable of rooting out in the soil after transplanting.

Not only is water becoming scarce, but it can be costly to treat or to purchase if the water source from a well runs out. Recycling water is becoming a common practice and requires monitoring to ensure that salts, nutrients and alkalinity are ideal for the crops grown, and good sanitation is needed to kill pathogens that can be found in recycled water.

This is especially true if the bark is fresh and has not gone through a “composting process”, or if the growing medium contains a high percentage of bark. Controlled release fertilizers should be applied when the crop is actively growing, not when plants are beginning to harden. If not, the fertilizer salts can become high, reducing crop survival rates when they are exposed to freezing temperatures or other stresses that occur during production.

Weed control in container crops is a big challenge and the use of herbicides is not always possible or can harm crops. Pre-emergent herbicides are available, but must be applied before weed seed germinates. Post-emergent herbicides can cause phytotoxicity and must not be used when plants are actively growing. Because herbicides can cause crop damage, a lot of hand weeding is required. Growers are using weed barriers like rice hulls and bark as top dress to reduce the emergence of weeds and liverworts.

Growing media for containerized crop production must have good drainage capabilities and limited shrinkage and compaction over time. Many growers use growing media with various combinations of bark, peat moss and sand. Pine bark used in container media is undoubtedly a great component. It provides the long-term drainage and aeration needed by plant roots. It also increases the bulk density of the growing medium and therefore stabilizes the container in windy conditions.

However, if bark is not composted or aged sufficiently, it can immobilize the nitrogen needed by plants, causing nitrogen deficiency. Now, other sources of aggregates, like coir and rice hulls, are beginning to be incorporated to help reduce nitrogen immobilization and improve crop quality.

Liners rooted out very well and the growing media held water and nutrients. The results from one long-term trial showed lupines that were planted in spring were ready to sell the following spring just like those grown in the bark growing media.

This picture shows the results of a one-year trial with lupines. The growing media from left to right are: 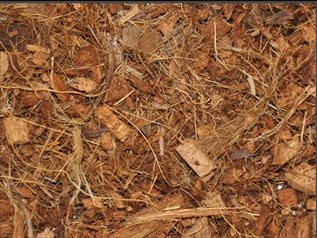 Growing media amended with chunk coir retain more water than bark growing media. Therefore, there is a significant reduction in water usage and fertilizer run-off, both of which save money. These benefits are especially important for areas with restricted watering. For employees, the lighter bulk density of the chunk coir growing media in comparison with the traditional bark mixes makes them easier to handle and reduces handling fatigue.

For more information about growing media for long-term container crops or the use of our growing media with chunk coir, please contact your Premier Tech Grower Services representative.

BIOFUNGICIDE™, MYCORRHIZAE™, ORGANIK™ are trademarks of Premier Tech Ltd. and are used under license by Premier Horticulture Ltd.