The pH of a growing medium is influenced by several different factors, two of which have been addressed in previous articles: the alkalinity of the irrigation water, as well as the amount and form of limestone incorporated into the growing medium. This article will focus on the third major factor: nitrogen.

In standard greenhouse fertilizers, nitrogen is supplied as ammonium (NH4+), nitrate (NO3-) or urea. Each of these three nitrogen sources, when taken up by plant roots, produce different chemical reactions with differing effects on the growing medium pH. This article will briefly describe those effects on growing medium pH. 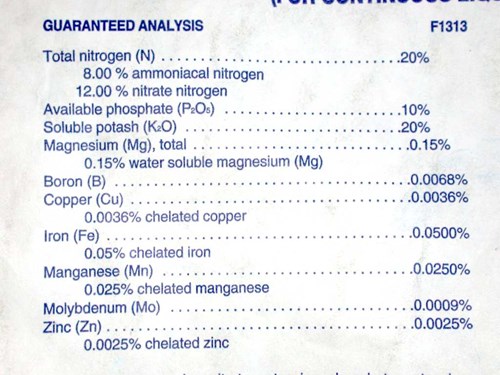 This is a typical analysis of the elements found in a fertilizer. Notice the top three lines indicate the total and nitrogen and the breakdown of ammoniacal and nitrate nitrogen. Source: Premier Tech Horticulture

When ammoniacal nitrogen (NH4+) is taken up by the plant, it is converted to ammonia (NH3) within the root. This process results in the release of a positively charged H+ cation from the plant root. The H+ cation then reacts with the growing medium causing a reduction in its pH. The higher the concentration of ammoniacal nitrogen in the fertilizer, the greater the impact it has on lowering the growing medium pH. 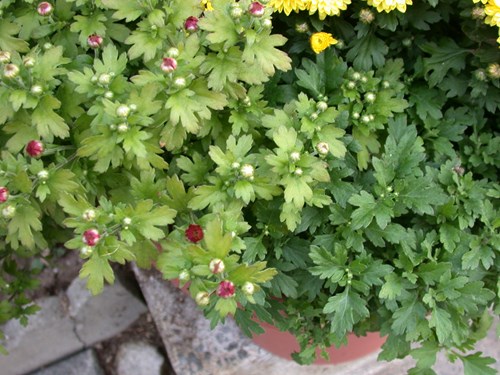 Mum on left has ammonium toxicity symptoms, while the one on the right is normal. Notice the chlorosis and brown flecking near leaf margins. Source: Premier Tech

Urea nitrogen ((NH2)2CO), the third nitrogen source, is often broken down by microbes in the growing medium to form NH4+ (ammonium) and CO2- (carbon dioxide). As stated above, when a plant roots takes up ammoniacal nitrogen, it emits H+ into the growing medium, thereby reducing the pH of the growing medium. However there is significant evidence that shows plants roots take up some urea, which has no electrical charge. Therefore, urea is considered neutral and therefore does not have an impact on growing media pH.

Other than nitrification, the impact of nitrogen form on growing medium pH only occurs when the plants take up the nitrogen. If plants are very small or not growing, the plant uses little fertilizer and therefore the growing medium pH will not be affected by the addition of fertilizer.

Understanding the function of nitrogen form on growing medium pH is an additional tool in a grower’s arsenal for optimizing nutrient availability. Combined with knowledge of the alkalinity of the irrigation water, a grower can choose the fertilizer formulation that will maximize plant growth. As a general rule of thumb, growing medium pH can be controlled through the choice of nitrogen form as long as the alkalinity of the irrigation water does not exceed 235 ppm CaCO3. Once it rises above 235 ppm CaCO3 the amount of acid needed to maintain a desirable growing medium pH can no longer be provided by fertilizer source alone and acid injection is recommended.