Chris Hoskins is a fifth generation greenhouse grower who started working part time in his parents greenhouses while still in high school in 2001 and then became full time in 2005. The financial difficulties of the 2008 recession coupled with devastating greenhouse damage caused by Hurricane Ike forced Chris’ parents to close down both of their growing locations. Not deterred, Chris sought and found investment funding that allowed him to re-open the greenhouses, forty miles west of Houston in Hempstead, TX.

The new operation, named Plant Pro Inc ., opened in 2009 on 19 acres with 16,000 square feet of greenhouse space. Since 2009, Chris and his wife Rocio have grown their business to over 90,000 square feet of greenhouse production as well as several acres of outdoor production. Chris’ primary crops are bedding plants which he markets to landscapers via re-wholesalers and brokers. Over the past few years, Chris has seen his business grow with the increased demand for perennials and ornamental grasses. Chris prides himself in his customer service and delivers over 99% of his crop directly to his re-wholesalers and landscapers in his three delivery trucks. 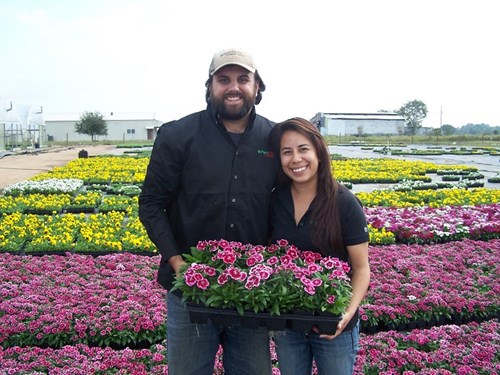 Chris faces many of the same growth concerns as other greenhouse growers are facing, primarily, health care coverage for his employees.  He is currently in the “sweet spot” in employee count where he is able to make a good living and pay a decent wage to his employees without the requirement of supplying health insurance. He feels he would need to significantly expand his operation in order to achieve the economies of scale needed to provide health insurance and still keep his business profitable. He says he is watching other growing operations in the area to learn how they are able to meet the coverage requirements while maintaining a sustainable business.

In 2012 Chris purchased a Kase Bale Buster and switched his soil mix from a bark mix arriving in 2.8 cu ft bags to PRO-MIX® with MYCORRHIZAE™ in a 135 cu ft Mega-Bale. The switch not only reduced the cost per cubic foot of his mix, but eliminated the need for one person who was solely responsible for adding the bags of mix to his potting machine. Chris says he also experienced an unexpected benefit from the switch to the Mega-Bale format,” less trash” around the greenhouses as the empty Mega-bale bags are large so they don’t get scattered around by the wind like the 2.8 cu ft bags did.

With the robust growth in the Texas economy and Chris’ business savvy, it looks like he is well on his way to making this a sixth generation family business. We thank Chris, Rocio and the entire Plant Pro Inc. crew for their support of Premier Tech Horticulture.