Fertility Trends: Petunias Yellow? It May Not Be Iron Deficiency

Most growers have seen yellowing in the new growth of their petunias, calibrachoa and other crops as listed in Table 1.

If the symptoms appear as interveinal chlorosis (yellow leaves and green veins) of the new growth or if the symptoms progress to the point that the leaves turn completely yellow or white, this is often due to iron deficiency either from lack of iron application or high growing medium pH which makes iron unavailable for plant uptake.

A simple way to correct iron deficiency is to apply an iron chelate drench to the growing medium. This will not only provide more iron, but a good chelating agent will allow iron to be available over a higher pH range as seen in Table 2. 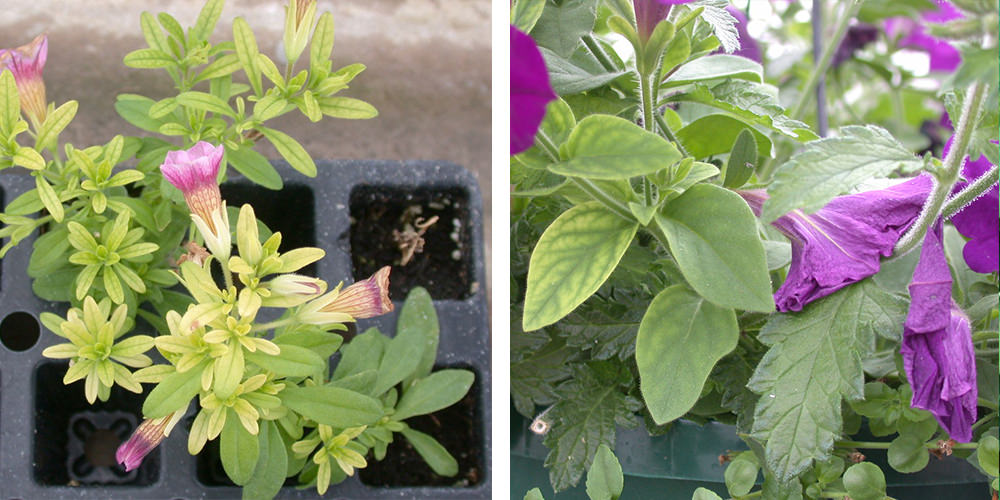 Figure 1. The calibrachoa on the left and the petunia on the right are both exhibiting iron deficiency as interveinal chlorosis in the new leaves. As the problem progresses, the leaves eventually turn solid yellow and then eventually white. Source: Premier Tech

If an iron chelate is applied to a crop that only has manganese deficiency, the interveinal chlorosis, caused by manganese deficiency, may initially improve. However, after a few days, improvement stops and the interveinal chlorosis becomes much worse. A manganese fertilizer needs to be applied, but the rates may need to be quite high to compensate for the high levels of iron from the iron chelate. Iron should be found at 1.0-2.5 ppm in the growing medium for crops listed in Table 1; but, an iron chelate applied at 5 ounces per 100 gallons of water will provide 37.5-47 ppm iron, depending on the product. Respecting the ideal iron to manganese ratio of approximately 2:1, 10-20 ppm of manganese would have to be provided.

Figure 2. The petunia on the left and the soybean on the right are both exhibiting manganese deficiency as interveinal chlorosis in the new leaves. The symptoms are like iron deficiency and can be easily confused. Testing should be done to confirm what is causing the symptoms. Source for petunia: www.keywordsking.com/bG93IGlyb24gbGV2ZWxz/, Source for soybean: www.cargillag.ca/expert-network/expert-blog/micronutrient-watch-2016.

“Next time interveinal chlorosis is found in petunias or calibrachoa, remember that it may not be caused by iron deficiency, but manganese deficiency.”

It is best to test the growing medium and plant tissue to verify which element or elements are deficient. Applying an iron chelate to a crop that is deficient in manganese will lead to more crop problems and negatively impact crop quality.