Critters Down Under: Root-Knot Nematodes 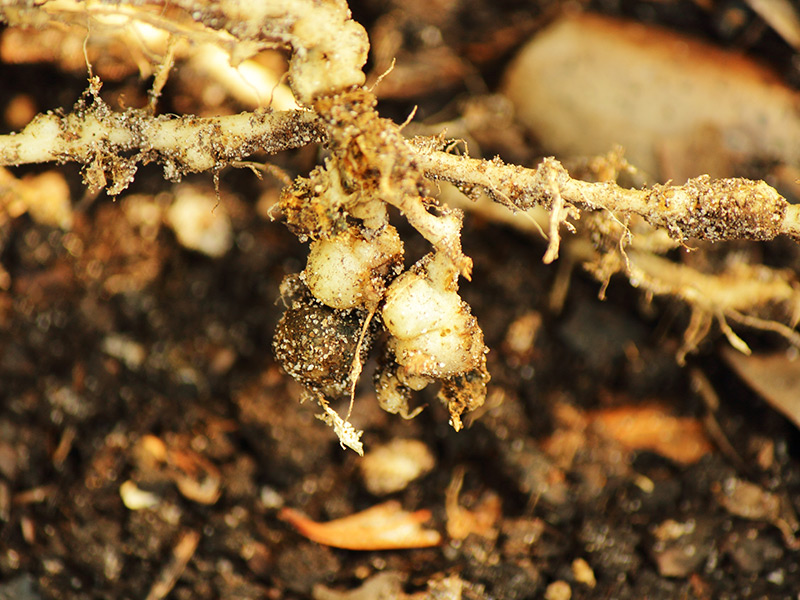 Nematodes are microscopic round worms that are not visible to the human eye and are the most abundant members of the animal kingdom on Earth.  There are over 25,000 known species that can be found around the world in the Arctic, deserts and deep in the ocean, but most dwell in outdoor soils.  Many of these species feed on bacteria, fungi, algae, other nematodes, or insect larvae.  In fact, Steinernema feltiae is a common nematode that is used to control fungus gnats and western flower thrips larvae in soils or growing media.

Although many nematodes are beneficial, there are some species that are herbivores and are therefore plant parasites that feed on plant roots, leaves or stems.  Some nematodes are host-specific and feed off a small number of plant species, while most have a wide host range.  Although it is highly unusual to find parasitic nematodes in professional growing media, they can be accidentally introduced.  The focus of this article is to discuss the most common parasitic nematodes, root-knot nematodes.

The most common root-knot nematode is the northern root-knot nematode, Meloidogyne spp.  It infects hundreds of types of perennials (daylilies, hostas, etc.) and vegetables (carrots, celery, parsnips, peppers, tomatoes, etc.) grown in fields in the United States and Canada.  They can also infect some grass species, which may not exhibit the classic symptom of “knots” (from which their name comes from) or galls on the roots (see below). 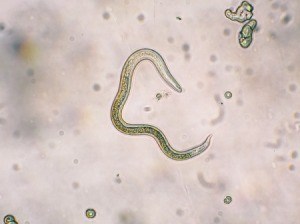 Root-knot nematode as seen through a microscope.  Source: https://www.thriftyfun.com

The life cycle of root-knot nematodes starts when eggs are laid by females.  Nematodes molt four times, with the first molt occurring within the egg.  After hatching, the emerging juveniles move through water films on the soil particles, looking to enter and infect plant roots, usually near the root tip.  The root-knot nematode inserts its stylet (piercing mouthpart) into the root cell, where it extracts nutrient-rich fluids.  Chemicals emitted by the root-knot nematode cause surrounding cells to swell.  Since root-knot nematodes use the same feeding site for most of their lifecycle, the swelling cells around the nematode form a “knot” or gall, enveloping the root-knot nematode.  Juveniles will molt three more times before becoming adults. 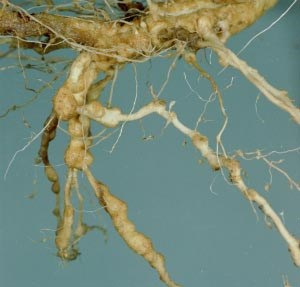 Root-knot nematodes caused swelling and round galls on the roots of this daylily.  Source: http://www.the-greenexpert.com

The most obvious symptoms appear on the roots as galls.  Galls are hardened tissue that is part of the root.  It can appear as individual small round growths on roots or, if infestation is heavy, many infected spots coalesce into enlarged gnarled roots.  Galls can be confused with nodules formed by nitrogen-fixing bacteria in legumes (beans, peas, etc.).  Nodules easily rub off the roots, whereas galls do not.

Since root-knot nematodes are stealing plant nutrients and water, the plant appears to have symptoms of a poor functioning root system.  This can include chlorosis or off-coloured foliage from nutrient deficiencies, stunting, early wilting in hot conditions, and reduction of fruit / vegetable yield.  The stress and damage caused by root-knot nematodes often make plants more susceptible to root rot pathogens.  Symptoms are more pronounced if root-knot nematode populations are high.  At low populations, plant damage is almost negligible, and if damage occurs, it is towards the end of the crop cycle when the soil is warm and root-knot nematodes had more time to develop larger populations.

Root-knot nematodes are close to impossible to eradicate from outdoor soil or after they are introduced into the growing medium.  Containerized plants that are infected should be discarded.  There are nematicides and biological controls that provide moderate success.  Hot water dips have been used with good success with bare-root plants, but it can cause damage in emerging foliage.  Another successful procedure is to root prune bare-root perennials as root galls and root-knot nematodes tend to be in the middle or tips of the roots, where they can be pruned off.

For field crops, chemical and biological controls are moderately effective.  Resistant plants, especially grasses and other monocots, could be grown for a season, which will cause root-knot nematodes to starve, reducing populations.  Incorporating composts or other biologically diverse soil amendments can provide microorganisms that compete with nematodes, or at least release plant nutrients to maintain better health and help plants withstand root-knot nematode infections.  Soil flooding, in which the soil is under water for numerous 2- or 3-week cycles, can drown nematodes, while repeated tilling helps by bringing nematodes up from the soil depths to the surface where the sun and wind can dry them out and kill them.

If you have any questions about our PRO-MIX and peat-based products and how nematodes or other insects can impact your greenhouse crops, please contact your Grower Services Representative.