Have you ever heard about Biochar? This component has received a lot of attention in recent years because of its nature to lock up significant amounts of carbon, thus reducing carbon emission into the atmosphere. Not only does it have capacity to immobilize carbon, but in ancient agricultural practices, charcoal, which is made with a similar process as biochar, was used to enhance soil productivity. Surprisingly, there is little documentation about the use of biochar in modern agriculture.

Biochar is a carbon-rich product resulting from the heating of biomass (derived from plant or animal, most commonly from wood) in an oxygen-limited environment. The process involved would in fact be carbon negative, because carbon sources in the biomass would return to soil without generating CO2 that would escape into the atmosphere.

Biochar can be produced in various ways, ranging from pits in the ground to sophisticated industrial pyrolysis kilns. Pyrolysis is a thermochemical decomposition of organic material at elevated temperatures. The word is from the Greek-derived elements pyro "fire" and lysis "separating”. The process is used to produce charcoal, activated carbon, methanol, and other chemicals from wood; to convert ethylene dichloride into vinyl chloride to make PVC, produce coke from coal and convert biomass into syngas and biochar. 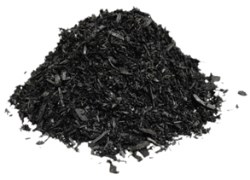 The literature has shown that incorporating biochar into the soil can alter its chemical properties such as CEC, pH and nutrient availability. Biochar application can increase soil carbon immediately, but the carbon in biochar will be unavailable for use in the soil for centuries to millennia.

Biochar can be made from various biomass sources and therefore have different chemical properties. For example, biochar from manure sources have a higher mineral content than biochars from woody sources, so they can supply more nutrients to soil, possibly in a slow-release form. Some biochars, particularly those made from paper mill residues and manures that are processed at high temperatures, have a liming effect and would benefit soils with low pH.

Influence on Soil Microbes and Plants

Biochar application has also been demonstrated to modify the biological activity in the soil by providing a habitat for microorganisms within its highly porous structure or by altering substrate availability and enzyme activities on or around biochar particles. In a few studies, biochar application has been shown to possibly suppress some soil-borne diseases. In a limited number of greenhouse experiments, incorporation of biochar into growing medium has been found to enhance crop yield, increase populations of plant growth-promoting microbesand promote disease suppression.

Inoculating a peat medium with biochar with Rhizobia and mycorrhizal fungi may serve as a potential microbe activator. The research is quite limited but has indicated that these beneficial microbes are more efficient with biochar. More research is required to define the interactions between microorganisms and biochar in various environments. Although more research needs to be conducted, these experiments show promising applications for crops with long production cycles such as greenhouse grown tomatoes or woody ornamentals.

Presently many countries are launching different initiatives for industrial production and distribution of biochar. This should lead to the development of new products for the agricultural and horticultural industry. However, the following points need to be further researched and clarified before biochar will be accepted by the horticulture industry:

In conclusion, the potential of biochar for field soil crops or long term horticulture crops is promising, but at this point research has mainly investigated the carbon mitigation with biochar applied to soil. Forestry and agriculture generate important biomasses which can be used to make biochar, but these sources are also the third largest fuel after coal and oil. If their transformation into biochar is proven viable on a large scale and beneficial for soil applications and the horticultural industry, biochar could become a significant alternative in reducing CO2 emissions.