Photosynthesis is a chemical reaction through which plants absorb light and transform it into sugars and oxygen. It is a highly complex process that is vital to nearly all organisms on Earth. But exactly how does it work? 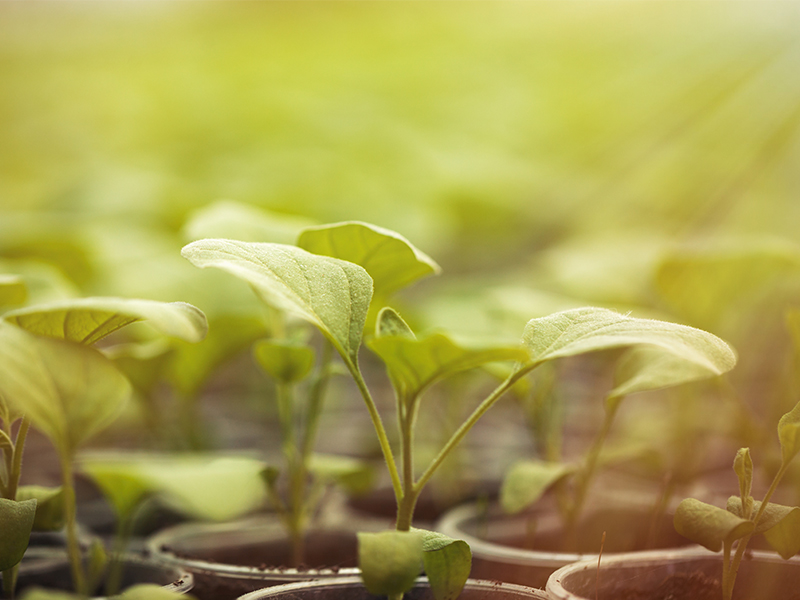 Plants are autotrophic organisms, which means that plants produce their own food and they support other organisms. Without the sun, photosynthesis would stop and no life could be sustained.

Photosynthesis is the chemical reaction where carbon dioxide (CO2) and water form sugars and oxygen in the presence of light energy. The sugars formed by photosynthesis are used by the plants as a food energy source. Under natural conditions, the sun provides the energy to trigger photosynthesis.

Plants use a specific portion of the solar (light) spectrum for photosynthesis, which is called Photosynthetic Active Radiation (PAR) (Figure1). PAR is the region of the solar radiation between 400 and 700 nm. 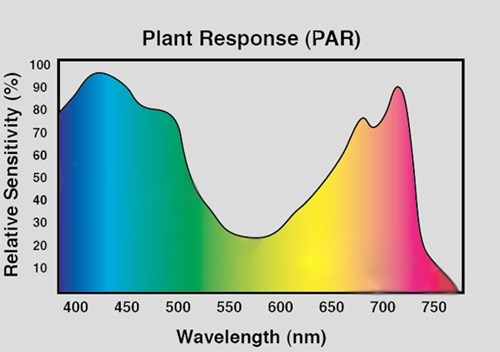 Figure 1. The higher the line, the more response plants have to this wavelength and light color. Most of the photosynthetic activity of a plant occurs between 400 – 700 nm. Source: www.supergrowled.com/orchid-led-grow-lights

Why are leaves green?

It is incredible, but less than 5% of the energy emitted by the sun is used for photosynthesis. In plants, the photosynthesis process takes place in the chloroplasts within plant cells. This organ contains the pigment chlorophyll (green pigment) which is in charge of absorbing the light from the sun. Plants contain both chlorophyll a, which absorbs mostly violet and red light, and chlorophyll b, which absorbs blue and red light.

Photosynthesis occurs mostly in the leaves of the plant; however, it can occur in the stems, but in a minimal proportion. It begins when CO2 enters the leaf through the stomata (openings in the leaves) (Figure 2). Most of the stomata are located on the underside of the leaf to avoid excessive water loss. Stomata allow for the exchange of CO2, oxygen and water vapor between the leaf and the environment. 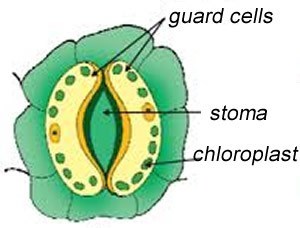 “Figure 2. Stomates are found mostly on the lower leaf surface.
The guard cells of the stomates open and close to allow for gas
exchange. Source: www.dynamicscience.com.au »

Plants differ in the pathway to fix CO2; as a consequence, the light independent reactions can be classified as pathway C3, pathway C4 and pathway CAM. C3 plants are adapted to temperate climates while C4 plants are adapted to hot, dry climates. The CAM plants are mostly cacti; they open the stomata at night to reduce the loss of water by transpiration.

As mentioned before, plants photosynthesize while they are exposed to the PAR radiation; this refers to light quality (Figure 1). As mentioned before, chlorophyll a more efficiently absorbs violet-blue light and red light. Therefore, it is preferable to expose plants to this light quality, at a certain intensity (amount of energy). When choosing supplemental lighting and especially working solely with artificial light, it is important to choose the right light source.

For example, incandescent bulbs have low efficiency since most of the energy is used to heat the lamp; in addition, most of the light energy is provided in the red region. High Pressure Sodium lamps (HPS) and the Light Emitting Diodes (LED) are the most efficient light sources on the market. HPS lamps have two peaks in the PAR region, one small in the blue and a larger one that spans the yellow, orange and red regions of the spectrum.

Regardless of the light energy source, plants need a minimum light intensity to trigger the photosynthesis process; this point is called the light compensation point. This point is where the CO2 absorbed is equal to the CO2 released. As light intensity and the amount of energy coming from a light source increase, the greater the photosynthetic rate.

Knowing the light compensation point for the crops grown is very important when choosing a glazing for the greenhouse. Glazing materials for the greenhouse have different light transmittance, likewise with shade cloths. Old glazing will transmit less light than new materials due to clouding or accumulation of residues. Another important factor in light transmittance in a greenhouse is the structure. For example, glass greenhouses have more structure (purlins, sash bars, rafters, etc.) than a polyethylene greenhouse.

Therefore, a glass greenhouse will have more shadows than a polyethylene greenhouse. The photosynthetic rate of plants diminishes by the same percentage as the amount of blocked incoming light. Similarly, crop yield is reduced by the same percentage. Consequently, proper cleaning of the glazing material is required in the beginning of the season to ensure maximum light transmission.

Polyethylene glazing is simple to use and requires little overhead structure; however, it has slightly lower light transmission and shorter life than many glazing materials. Source: Premier Tech

As temperature continues to rise above this point, enzyme activity decreases until photosynthesis stops. It is important to keep in mind that the photosynthesis rate in C3 plants is higher under cold conditions, whereas in C4 plants it is higher in warm conditions.

Besides water and light, the other main component required for photosynthesis is carbon dioxide (CO2). It is important to maintain high enough CO2 values for photosynthesis. CO2 enters through the stomata of the leaf (Figure 2); this organelle opens and closes depending on several parameters. When the plant is under water stress, exposed to high wind speed, experiencing nutrient deficiencies or the Vapor Pressure Deficit is too high, the stomata close, interrupting the exchange of oxygen, CO2 and water vapor between the plant and the atmosphere. As a result, the photosynthetic rate decreases.

In greenhouses, it is important to exchange the entire volume of oxygen-rich air from inside the greenhouse with fresh, outdoor air several times per hour in order to maintain favorable atmospheric CO2 levels in the greenhouse. This is more important during the winter season, since the greenhouse is closed to the environment to minimize heat loss.