As plants take up nutrients, they are deposited in the cells of leaves prior to being used by the plant. However if plant nutrients are not used right away, they can start accumulating in these cells. Nitrate can safely be stored at high levels in plant cells, however ammonium accumulation can damage plant cells.

Other factors that slow the activity of nitrifying bacterium include low oxygen levels in the growing medium from slow dry-down and low growing medium pH. Crops that are most sensitive to ammonium toxicity include coleus, eggplant, pansy, pepper, salvia, tomato and zinnia. 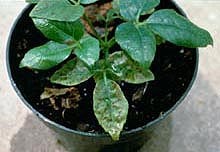 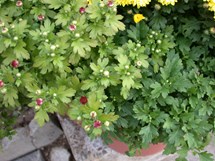 Mum on left has ammonium toxicity symptoms, while the one on the right is normal. Notice the chlorosis and brown flecking near leaf margins.Source: Premier Tech.

Symptoms start in the newest leaves as chlorosis between the veins or these leaves completely turn a yellow-green color. Overtime necrotic spots form within the chlorotic areas and symptoms can progress down to the middle of the plant. Leaf edges could curl upward or downward, root growth slows, and in some cases root tips may die.

First, switch to a fertilizer that provides little to no ammoniacal nitrogen (such as 15-0-15) or a calcium-magnesium fertilizer. Second, increase the temperatures in the greenhouse to warm up the growing medium so nitrifying bacteria can actively convert ammonium to nitrate. Last, avoid keeping the growing medium wet, which also slows the activity of nitrifying bacteria. Within 7-10 days after making these adjustments, there should be no further progression of ammonium toxicity symptoms.

As stated, ammonium toxicity is most likely to occur during the cold growing conditions of winter. From November through mid March it would be advisable to adjust the following to minimize ammonium toxicity:

If you have further questions on this or other topics related to growing media, please contact your Premier Tech Grower Services Representative.