In Canada, there is an abundance of peatlands and producers follow "wise use" guidelines for the harvesting and preservation of peat bogs. Peat bogs were formed centuries ago after the last ice age ended, and bogs continue to grow with the slow accumulation of vegetal debris in peatlands, which are classified as a type of wetland.

In Canada, these wetlands appeared after glaciers melted and water collected in shallow depressions on poorly drained soils under cool, moist and oxygen poor conditions. This environment has limited bacterial action due to cool temperatures. Therefore, the rate of sphagnum moss plant growth exceeds the rate of decomposition. Over time, the slow decomposing moss debris accumulated, forming a peat deposit that in some places can exceed 6 meters in depth. The rate at which peat accumulates in Canadian peatlands ranges from 0.5 to 1 mm per year.

Peatlands cover approximately 113.6 million hectares in Canada, or around 13% of the country’s surface area, and are present in all provinces. The most extensive peatland concentration is found in the Hudson Bay lowlands of Ontario and Manitoba. Peatlands are also abundant in northern Alberta, central Saskatchewan, Quebec and in the Atlantic provinces.

Of Canada’s 113.6 million hectares (ha), less than 0.03% has been or is currently used for horticultural peat production (29,750 ha). In 2015, out of the 29,750-ha total footprint, 58% was currently under production and 25% has been restored or reclaimed. The area that still needs to be restored accounted for 15% of the total footprint, while 2% has been converted to other land use (mostly agriculture). If you consider the total peatland area where sphagnum peat moss continually grows and the amount of area that is harvested for peat moss, Canadian sphagnum peat moss growth far exceeds the rate of harvest.

Almost all sphagnum peat moss in Canada is harvested with vacuum harvesters. To harvest a new section of peat bog, the higher plant material must first be removed.  If present, this includes the removal of vegetation, such as tamarack trees, black spruce trees, etc., small low-growing plants from the Ericaceous family (blueberry, Labrador tea, rhododendron), and some carnivorous plants(pitcher plant, sundew). Once vegetation is removed, the peat bog surface is cleared to reveal the live sphagnum moss.  The live moss is removed and relocated to other sections of the peat bog for reclamation and sustainability. The sphagnum peat moss below is harrowed and turned for the sun and wind to dry.  A vacuum harvester is used to collect the peat moss, after which it is transported to the factory for processing. 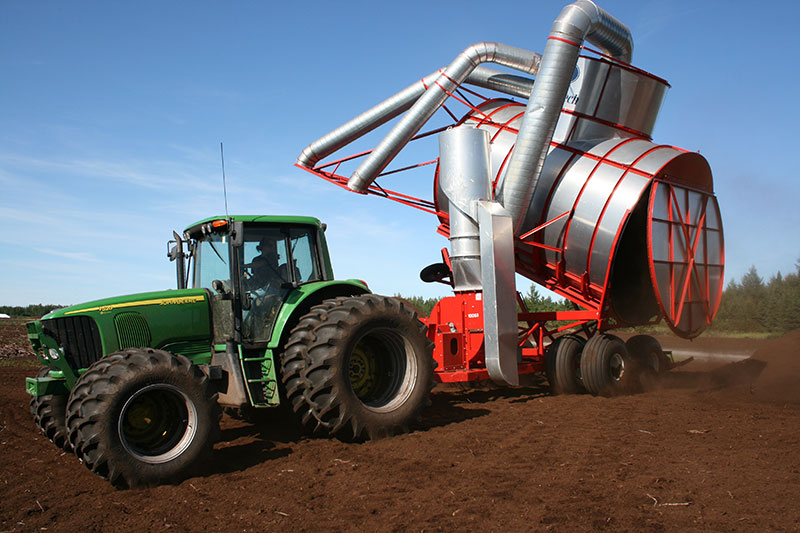 Sphagnum peat moss is harvested in Canada between the months of May and mid-September. After the snow melts, warmer days bring sunny and dry weather to dry the peat moss in the bog. On the third or fourth day, vacuum harvesters collect the peat moss. If it rains during this time, the clock is set back and another 2-3 days are required to dry the peat moss. With changing weather patterns and global warming, a week of clear, dry weather is not so frequent as in past years. Because of this, the challenge has been for producers of Canadian sphagnum peat moss to harvest enough product to meet the industry's demands. Producers are finding innovative ways to deal with these challenges to ensure there are sufficient supplies to meet demands. Canadian sphagnum peat moss is a sustainably managed resource and will be here for many generations.