Role of Sulfur in Plant Culture

Sulfur (S), along with calcium and magnesium, is one of the three secondary nutrients required by plants for normal, healthy growth. As mentioned in a previous article “Role of Calcium in Plant Culture”, the term secondary only refers to the quantity and not the importance of a nutrient. A deficiency in a secondary nutrient is just as detrimental as a deficiency in nitrogen, phosphorus or potassium. Sulfur is often overlooked and underappreciated in importance. There is a significant balance between nitrogen and sulfur. Without enough sulfur, plants cannot efficiently use nitrogen and other nutrients to reach their full potential.

Plants acquire sulfur from the growing medium as sulfate (SO4=). Sulfate is readily soluble and subject to loss by leaching. Plant metabolism reduces sulfate and sulfur dioxide to forms that can be used to build organic molecules. Sulfur is a vital part of all plant proteins, and certain plant hormones. It is also used in the formation of certain oils and volatile compounds found in the onion and garlic family. 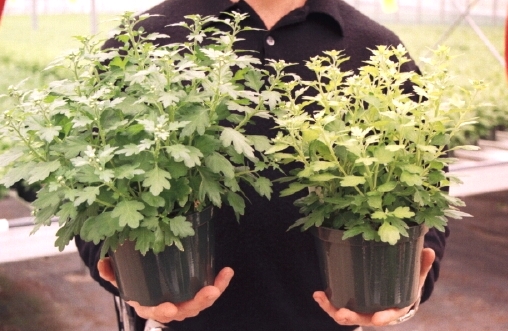 "The mum on the left is normal, while the one on the right has sulfur deficiency.
Notice the chlorotic, stunted growth. Source: Premier Tech Horticulture" 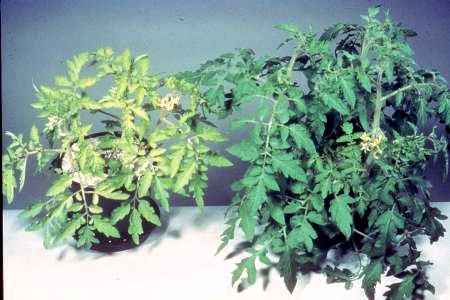 "The tomato on the left has sulfur deficiency, while the one on the right is normal.
Notice the chlorotic, stunted growth. Source: Premier Tech Horticulture"

Sulfur toxicity is very rare and will most likely not occur even if excessive sulfuric acid is injected to neutralize water alkalinity. High sulfur levels in the growing medium can compete with and induce nitrogen deficiency.

If water alkalinity is high and sulfur levels are low in your fertilizer program, consider using sulfuric acid as it will address both concerns.

To determine sulfur levels in your water or fertilizer solution, have it tested by Premier Tech Horticulture. Your Grower Services representative can explain the analysis, suggest fertilizers that can provide sulfur or, if necessary, provide sulfuric acid injection rates to neutralize excessive water alkalinity.