Role of Nickel in Plant Culture

In the past, nickel (Ni) was not considered an important element for plant growth, but research has concluded that it is an essential element for plant growth. The normal range for nickel in most plant tissue is between 0.05-5 ppm. Due to its low requirements (often in parts per billion), it is found in sufficient levels as a contaminant in the soil, water, fertilizer, etc. Nickel deficiency is unusual and is often misdiagnosed as it initially shows no symptoms in plants. This explains why most labs do not test for it and why it is not included in most fertilizers.

Nickel is a component of some plant enzymes, most notably urease, which metabolizes urea nitrogen into useable ammonia within the plant. Without nickel, toxic levels of urea can accumulate within the tissue forming necrotic legions on the leaf tips. In this case, nickel deficiency causes urea toxicity. Nickel is also used as a catalyst in enzymes used to help legumes fix nitrogen. There is evidence that nickel helps with disease tolerance in plants, although it is still unclear how this happens.

Minor nickel deficiency displays no visual symptoms, but can reduce growth and yield of plants. Significant nickel deficiency will display visual symptoms typically in the old leaves of the plants as nickel is a mobile element. Deficiency symptoms in legumes are exhibited as whole leaf chlorosis along with necrotic leaf tips (caused by the accumulation of toxic levels of urea). In woody ornamentals, symptoms occur in the spring in new emerging growth and may include shortened internodes (giving a rosetting appearance to the plant), weak shoot growth, death of terminal buds and eventual death of shoots and branches. In pecans, the symptoms are similar to woody ornamentals, but also include decreased expansion of the leaf blade and necrosis of the leaf tips. The leaves develop a condition called “mouse-ear” in which the leaflets are small with rounded tips vs. long and pointed. 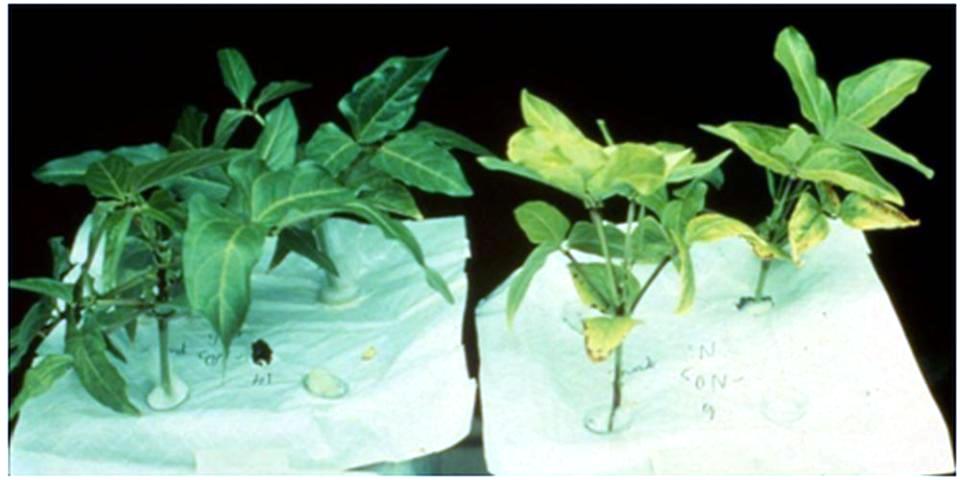 Nickel deficiency symptoms, as seen in cowpea on the right have similar symptoms to nitrogen deficiency. Lower leaves are chlorotic with necrotic tips and growth is inhibited. Photo Credit: www.eplantscience.com 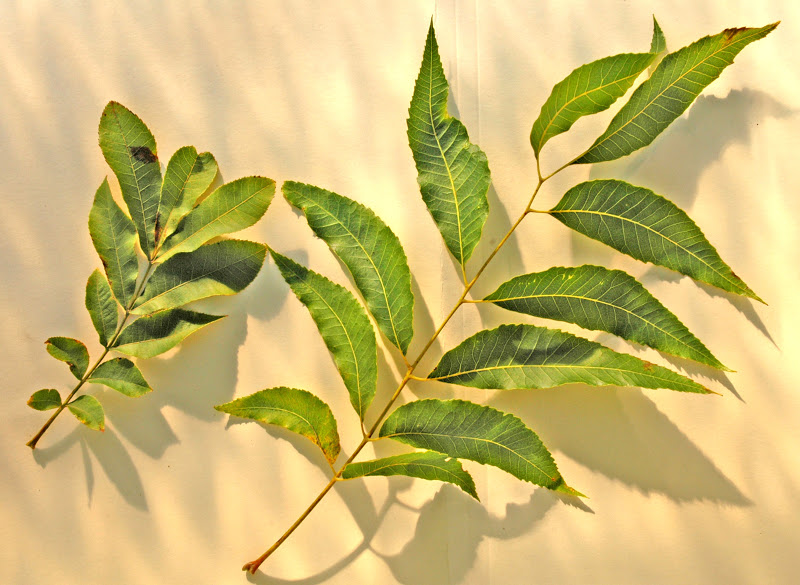 Pecan leaf on the right is normal while the leaf on the left has ‘mouse-ear’ due to nickel deficiency. Leaflets have rounded tips, necrotic spots along leaf edges and are smaller than normal." Photo Credit: northernpecans.blogspot.com 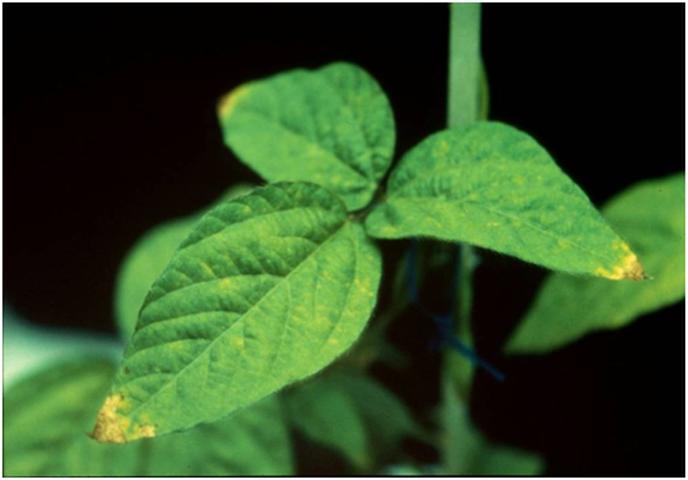 This soybean leaf is exhibiting nickel deficiency as leaf tips have been burned by accumulation of urea. Nickel is needed to form the enzyme urease to break urea down into useable ammonia. Photo Credit: www.eplantscience.com

Like most micronutrients, nickel becomes less available for plant uptake as the pH of the growing medium increases. High levels of zinc, copper, iron, cobalt, cadmium or magnesium in the growing medium can induce nickel deficiency. Crops that are most sensitive to nickel deficiency include legumes (beans and alfalfa), pecans, plum, peach, citrus, barley, wheat and certain wetland plants.

Nickel toxicity is unlikely to occur in greenhouse crops and has been found to be less toxic than other heavy metals, such as copper. Typically toxicities occur in woody plants if tissue levels exceed 80-120 ppm; sensitive plants, such as tomato, may exhibit toxicities above 10 ppm in the tissue. The early stages of nickel toxicity do not show clear visual symptoms, but shoot and root growth is often suppressed. Eventually symptoms are expressed and progress from interveinal or blotchy chlorosis of the new leaves (which is an induced iron, zinc or copper deficiency) and then suppressed leaf expansion to necrosis advancing in from the leaf margins and eventually plant death.

If nickel toxicity occurs, first verify by having the tissue tested. Check your fertilizer sources as sewage sludge and animal manures may contain significant amounts of nickel. Test the irrigation water as industrial chemical waste can contaminate water sources with excessive nickel. Nickel can be tied up in the growing medium if the pH is high (which also makes micronutrients unavailable for plant uptake); also correct any micronutrient deficiencies as they can compete with nickel, reducing excess nickel uptake by the plant.

Where to Find Nickel

Since nickel is needed in such small quantities and more research needs to be done, it is not added to most fertilizers. It can be found as a contaminant in fertilizer and the irrigation water and it is often found in sewage sludge and animal waste. Nickel can also be applied as a single element application as nickel sulfate or in a chelated form. Use caution as little nickel is needed to correct a deficiency.

Horticulture labs do not test for nickel in the media, tissue or fertilizer solution, since greenhouse crops are typically not sensitive to nickel deficiency or toxicity. If you would like to have this element tested, please contact your lab to find out if they can do it and at what additional cost. For more information about fertilizer nutrients and their role in your crop production, please feel free to contact your Premier Tech Grower Services representative.