Role of Molybdenum in Plant Culture

This cucurbit plant is exhibiting molybdenum deficiency on the old leaves as overall yellowing, leaf margin necrosis and some interveinal chlorosis.

Molybdenum is one of the essential micronutrients. Like manganese, it is only required in small amounts for normal plant development. However, it plays a crucial part in the regulation of various plant functions.

Molybdenum (Mo), the last of the required micronutrients, is needed in the smallest quantities by plants. The normal range for most plant tissue is between 0.3-1.5 ppm and in the growing medium between 0.01-0.20 ppm.

Function of Molybdenum in Crop Production

Molybdenum is an essential component in two enzymes that convert nitrate into nitrite (a toxic form of nitrogen) and then into ammonia before it is used to synthesize amino acids within the plant. It also needed by symbiotic nitrogen fixing bacteria in legumes to fix atmospheric nitrogen.

Plants also use molybdenum to convert inorganic phosphorus into organic forms in the plant.

What are the Symptoms of Molybdenum Deficiency?

As molybdenum is closely linked to nitrogen, its deficiency can easily resemble nitrogen deficiency. Molybdenum is the only micronutrient that is mobile within the plant, so deficiency symptoms show up on older and middle leaves, but it spreads up the stem and affects the new leaves.

In poinsettias, it shows up as thin chlorotic leaf margins around the leaf perimeter and then the margins become necrotic.

In some crops, the whole leaf turns pale and can also be followed by marginal necrosis. Leaves can be misshapen, and in the case of cauliflower, it can cause ‘whiptail’. ‘Whiptail’ is when the midrib of the leaf grows but there is severe restriction on the width of the leaf blade, making the leaves narrow.

In advanced stages, plant growth and flower formation will be restricted.

Crops that are most sensitive to molybdenum deficiency are crucifers (broccoli, cauliflower, cabbage), legumes (beans, peas, clovers), poinsettias and primula.

Molybdenum deficiency in cauliflower causes a condition called whiptail in which the leaves have a thin, strappy appearance.

Research has shown that high sulfates can reduce plant uptake of molybdenum. Molybdenum is the only micronutrient that becomes unavailable as the growing medium pH decreases.

If a deficiency occurs, check the pH of the growing medium. If the pH is ideal for the crop, then consider adding a molybdenum fertilizer supplement as discussed below. 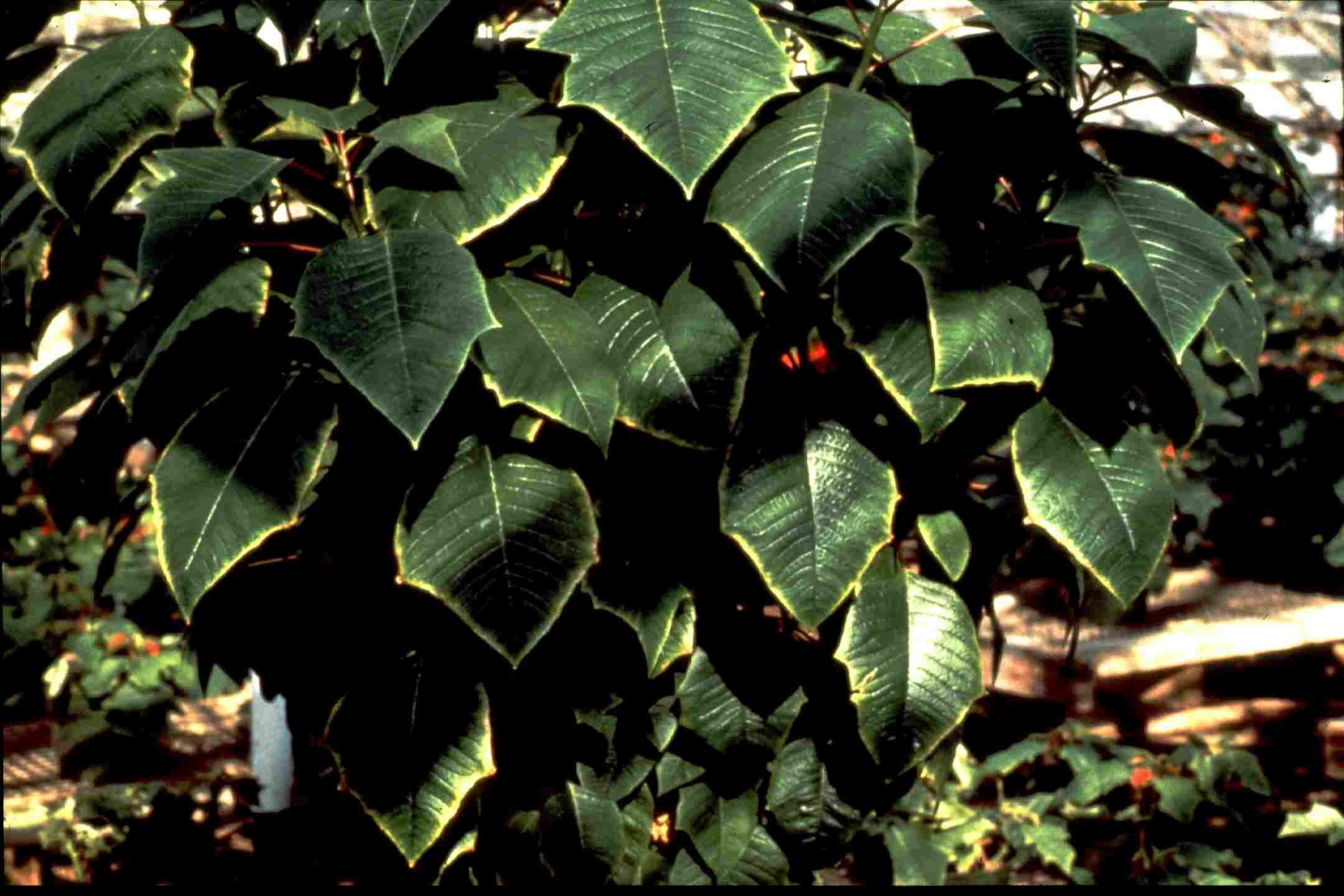 Classic molybdenum deficiency in poinsettia is shown as a thin, leaf margin chlorosis.

What are the Symptoms of Molybdenum Toxicity?

Molybdenum toxicity is very rare and, in some crops, the tissue can have several thousand ppm and still not show symptoms. In a few rare cases there has been report golden yellow appearance of the leaves.

Although not significant to horticultural crops, ruminant animals that consume grasses or feeds with high levels of molybdenum (5-10 ppm in the tissue) can get a disease called molybdenosis. This disease, in which excessive molybdenum competes with copper, induces copper deficiency within the animal.

Where to Find Molybdenum and How to Fix a Deficiency?

Molybdenum typically comes from most water soluble and some controlled release fertilizers. A fertilizer program can be supplemented with molybdenum by applying a complete micronutrient fertilizer (which help avoid micronutrient imbalances). Another way is through single element applications (such as sodium molybdate or ammonium molybdate). Very little molybdenum needs to be applied to correct a deficiency.