The most common species that attacks greenhouse crops is Sclerotium rolfsii. Sclerotium rolfsii occurs in outdoor soil, so it commonly infects beans, beets, carrots, corn, cucurbits, onions, peanut, peppers, potatoes, rice, tomatoes, watermelon and wheat, but it can also infect greenhouse crops such as chrysanthemum, iris, lilies, narcissus and zinnias. It is aggressive and grows very rapidly compared to most fungal plant pathogens.

There is some confusion due to the similarities in the names of the disease-causing fungi Sclerotium rolfsii and Sclerotinia. They are not the same fungal species, even though they have a similar appearance, as they produce white hyphae. Both produce sclerotia, or resting bodies, but they are different colors. However, Sclerotinia only produces acrospores that are released from cup-shaped fungal bodies called apothecia. Sclerotium rolfsii is active in warm to hot temperatures whereas Sclerotinia is most active at cool temperatures. Lastly, Sclerotinia only infects broadleaf dicots, whereas Sclerotium rolfsii infects both dicots and some narrowleaf monocots, such as wheat and onions.

Sclerotium is often confused with other terms due to their spelling:

Sclerotium rolfsii grows in temperatures ranging from 46 to 104 °F (8-40 °C), but prefers temperatures above 80 °F, along with high humidity and rainy conditions. Its cycle typically starts when sclerotia, the resting stage of the disease found in the soil, are exposed to temperatures above 80 °F. They then germinate, and emerging hyphae grow and penetrate stems or other plant structures that come in contact with the soil surface. It uses pectinolytic enzymes along with oxalic acid to break down a plant’s cell walls, so it can penetrate healthy tissue without requiring a wound to enter. After Sclerotium rolfsii establishes in the plant tissue, it develops white mycelium from the infection site, which eventually forms a fan-shaped pattern that continues to progress towards the plant's roots. If temperatures are at least 80-95 °F (27-35 °C), mycelium turns compact, and within 4-7 days after infection, it forms sclerotia that start out white but quickly turn tan to brown. Sclerotia can persist in the soil for many years. 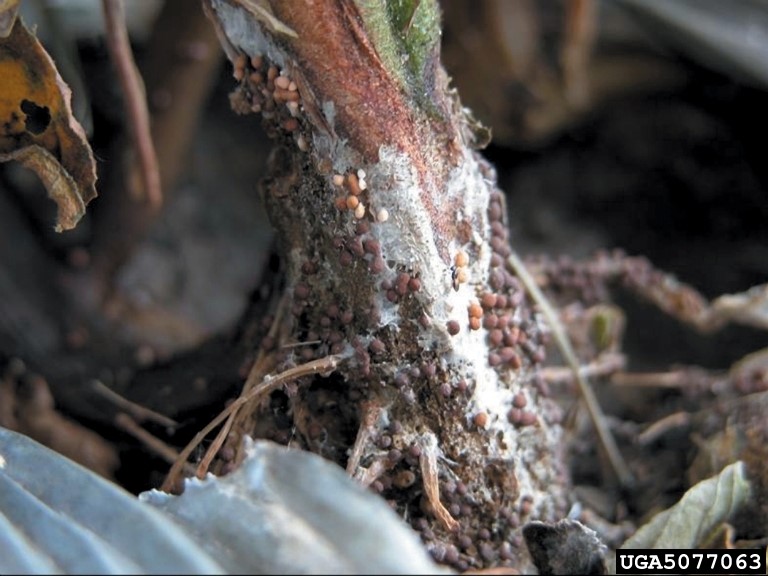 Sclerotium rolfsii infection at the base of an eggplant stem. Note the white mycelium and brown, round sclerotia. Source: David B. Langston, University of Georgia

Sclerotium rolfsii does not produce spores, like most fungal pathogens. Sclerotia are slightly heavier than spores, so they are less likely to be carried by the wind. However, they can be dispersed by water, animals and contaminated plows from one field to another. Diseased greenhouse crops can also be moved to other greenhouses, spreading the disease.

The first visible symptoms of Sclerotium rolfsii occur where plant parts such as roots, stems, leaves and fruit come in contact with the soil. Typically, brown lesions form and quickly become watery, soft, decayed tissue. Infected portions of the plant wilt and turn chlorotic due to an interruption in nutrient uptake. If conditions are very warm and humid, white mycelium will develop from the plant tissue. Although similar to Sclerotinia, it does not form higher up in the plant canopy. If plant canopies are dense and humidity is high, the disease can quickly spread throughout a single plant and transfer from one plant to another.

Sclerotium rolfsii prefers very warm to hot temperatures, high humidity and rainy conditions. Below are non-chemical control methods that can be used to minimize the development or spread of Sclerotium rolfsii in the greenhouse or nursery:


There are chemical products that can be applied to control Sclerotium rolfsii; consult with your distributor or university extension service for further details.