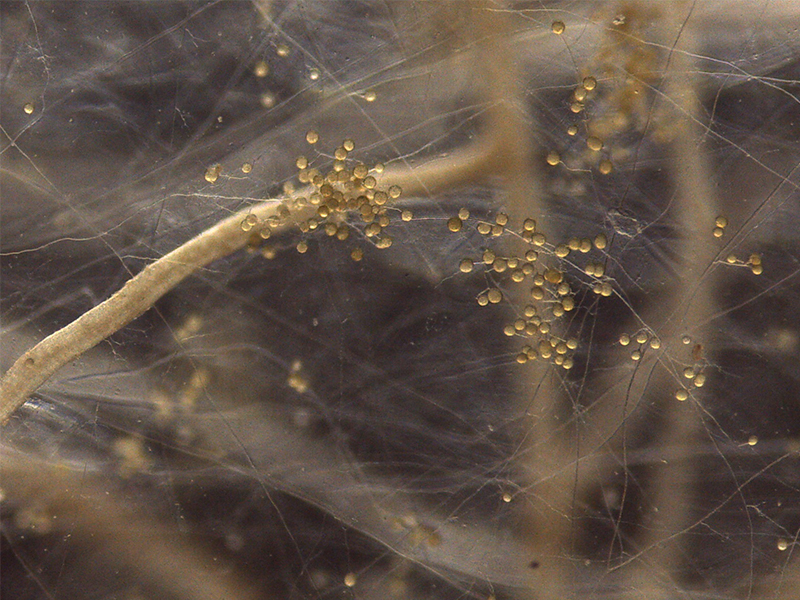 In undisturbed soils, mycorrhizal fungi are a major component of the soil's natural microflora, but their presence is not guaranteed in all soils when transplanting new plants in a garden bed or in newly landscaped area. Sometimes, nature needs a little help.

Mycorrhizal fungi live in symbiosis with the roots of a large variety of plants, including trees, shrubs, annuals and perennials. These microscopic fungi form a symbiotic association with the plant's root system in which it forms a network of extremely fine filaments, called mycelium, uniting the two partners appears (Figure 1). This union, called "mycorrhiza" ("myco" for fungus and "rhiza" for root), allows both partners to form a mutual exchange network at the root zone level to support the plant in a cultural environment that can sometimes be hostile. 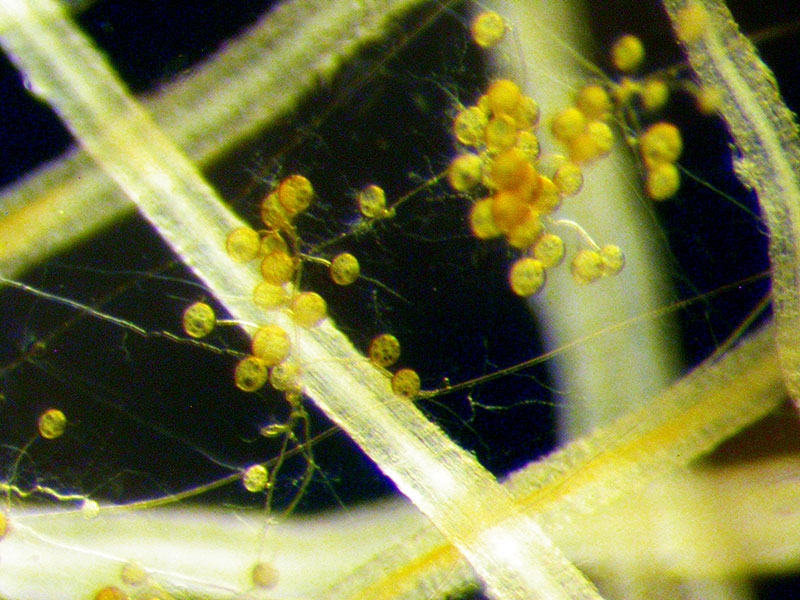 In this symbiotic relationship, the mycorrhizal network draws nutrients from the soil for plant roots, which would sometimes be inaccessible without the help of this invaluable ally. Mycelium bring the plant the nutrients it needs to develop properly, elements such as phosphorus copper and zinc, which aren't very mobile in the soil. They also draw water from within the soil's micropores, which would otherwise be inaccessible by the root. Thus, roots colonized by mycorrhizae enables the plant to be better protected and to resist the stress caused by transplanting, drought and heat, while maintaining an optimal growth rate.

Mycorrhizal fungi also receive benefit from symbiosis with the plant. Due to the plants ability to photosynthesize, the plant synthesizes carbon-based substances (sugars), which feeds the fungi. You may say there is an exchange of services between the fungus and the plant.

Urban landscaping is challenged by climate change and urban heat islands that are generated with the use of concrete surfaces in city environments. This means that the plants selected for these locations must be reviewed periodically to ensure they can survive in these landscaped areas with extreme temperatures, drought, human activity, etc. The soil must also be considered when it comes to plant survival, as it plays a crucial part in the retention of water and health of plants, especially for trees and shrubs, whose life cycle is longer than annuals. The organic matter, microflora and other organisms, such as earthworms, are essential factors in soil fertility and play a major role in the plant establishment success.

A good microbiological diversity in the soil helps maintain the soil's structure, which aids in the retention of water and nutrients. For example, it has been recently shown that phosphorus can be made available for plants from apatite (a group of phosphate minerals) through the interaction between mycorrhizal fungi and specific bacteria (Québec Science, January-February 2016).

Unfortunately, urbanization and human activity disturb the soil and greatly reduce the quantity of mycorrhizal propagules it contains. Soil amendments such as peat moss, compost and black earth do not contain the types of mycorrhizae required by most ornamental and vegetable plant species, so they must be added to the soil to help plants adjust to harsh climate and soil environment.

Mycorrhizal inoculants to help save plants

Mycorrhizal fungi inoculants have been available for various uses for about fifteen years. Several formulations are offered, either in soilless media (PRO-MIX MYCORRHIZAE products) for the production of horticultural crops or in more concentrated formulations that can be applied directly in fields at planting, or mixed into growing media used and in nurseries or incorporated into the soil when installing landscapes.

Although the importance of mycorrhizae has been amply demonstrated for decades, most of the plants sold by nurseries or greenhouse growers are not pre-inoculated with mycorrhizae, unless the growing medium contains mycorrhizae. Many growers think that mycorrhizae develop naturally in the soil and mistakenly believe that adding such microorganisms will not have any impact on production or recovery after transplanting. The fact that the benefits of mycorrhizal fungi are minor at the beginning of a production cycle could lead growers to believe that they provide little to no benefit, which is not true.

While the impact of a fertilizer on plant growth is immediate, the effect of a mycorrhizal inoculant will often be evident later, when the plant experiences stress from improper fertility, heat, lack of water, etc. Plants grown in a greenhouse or nursery are watered and fertilized in accordance with their needs. They do often do not see stress, in which mycorrhizae can benefit them.  It is only when they leave the greenhouse that they are likely to experience stresses that can be detrimental to their development.