Puerto Rico's climate makes it a great place to start a nursery. That is exactly what Diomedes Plaza did in the 1990s, in a little municipality called Adjuntas. Today, relying on his thorough experience, competent staff and Premier Tech Horticulture's products, his business is thriving. Let's take a closer look!

Bonrinquen poinsettias!Puerto Rico is known for its beautiful beaches, the colonial architecture of the Old San Juan and of course the Coqui frogs.

In this island of 110 miles long and 40 miles wide, there are different kinds of climates, from tropical to mild weather in the mountains. The municipality of Adjuntas is located in the west side of the Central Mountain range; for its mild climate, in this location there are a lot of nurseries, and Ornamentales de Adjuntas, owned by Diomedes Plaza and family, is one of them.

Diomedes Plaza is a great example of persistence and love for plants. Since he was young, he has showed an interest for horticulture and he began to study at the Residential School of Agriculture in Adjuntas. While he was a student, he started to work in a nursery in Adjuntas, P. R. 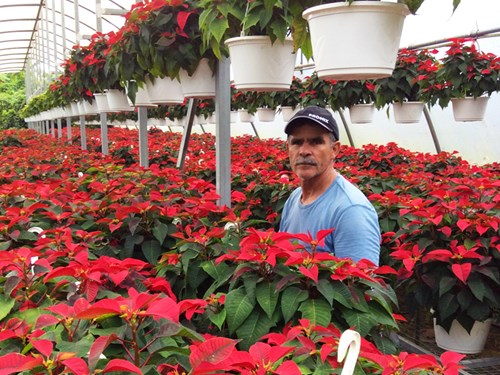 After a while, he realized that he wanted to dedicate his life to the production of plants, his passion. After finishing his studies in horticulture, he saw the need for independence, but his financial situation didn't allow it. Diomedes decided to look for another job and began to distribute copies of two different newspapers very early in the morning, and then went to work at the nursery. He performed those jobs for eight years.

The nineties began and already with his proven experience and the savings made during those years, he decided to build his first greenhouse beside his house in the Guillarte Adjuntas neighborhood.

In this greenhouse, he grew poinsettias, ferns, geraniums and anthuriums, among other crops. Within a couple of years, the demand for his plants, especially poinsettias, increased but the space to grow was limited. Diomedes' former employers then offered him to rent their facilities and his production space was greatly aggrandized.

By the end of the nineties, he bought a farm plot which is dedicated mostly to plantain production, and in a small part of the plot he has a couple of greenhouses dedicated to ornamental plant production. Including the three sites, Ornamentales de Adjuntas has a total area of 130,000 ft2.

Currently, Ornamentales de Adjuntas employs 11 people plus two top managers. It is worth mentioning that Diomedes’ wife takes care of the administrative part of the business, while Diomedes is the Head Grower.

Greatest challenge as a grower

Diomedes has the fortune of utilizing spring water with low Na and Cl content. This water has an ideal alkalinity to maintain the pH of the substrate in optimum conditions by alternating basic and acidic fertilizers. All plants are grown with drip irrigation. His greenhouses don’t need any environmental control because of the mild outdoor weather.

His greatest difficulties are pests because of the tropical climate; pests from the native plants are always waiting for the right moment to attack plants. His biggest concern is hurricanes because winds can destroy the greenhouses and consequently cause the loss of his entire production.

During the poinsettia season, most greenhouses are dedicated to the production of flowers and ferns. During the poinsettia production cycle, Diomedes is always in the greenhouses; he personally takes care of crop management, from irrigation to pest control through pinching plants, all in a timely manner. Perhaps it seems that all the work Diomedes does is easy, but it is a demanding and rigorous work that requires seven days a week. 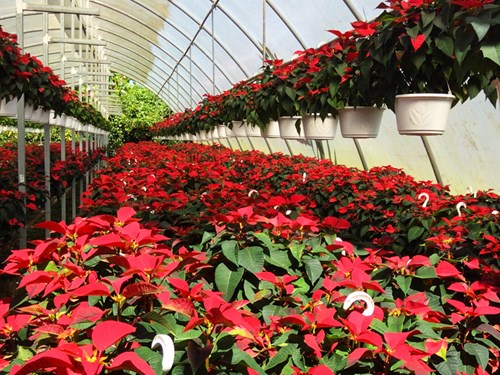 Poinsettias are turning red, they are almost ready for the winter holidays.

Ornamentales de Adjuntas offers a wide variety of poinsettias in different container sizes, with the 10-inch hanging baskets being the most popular. Diomedes’ flowers can be found in Sam’s Club stores and independent garden centers throughout Puerto Rico. When the Christmas season ends, the greenhouses are refilled with different plants which are offered during the spring season. Among the crops that require the most expertise and care are roses, hydrangeas and angelonias.

Diomedes expressed that he has used many types of substrates throughout his career as an ornamental grower, but the substrates that have given the best results are the PRO-MIX® products. including PRO-MIX® HP.

Diomedes likes the PRO-MIX® products because of their high quality and uniformity from bale to bale, in addition to providing flexibility in plant management. At this time, we are working on making the transition to PRO-MIX® products with MYCORRHIZAE.