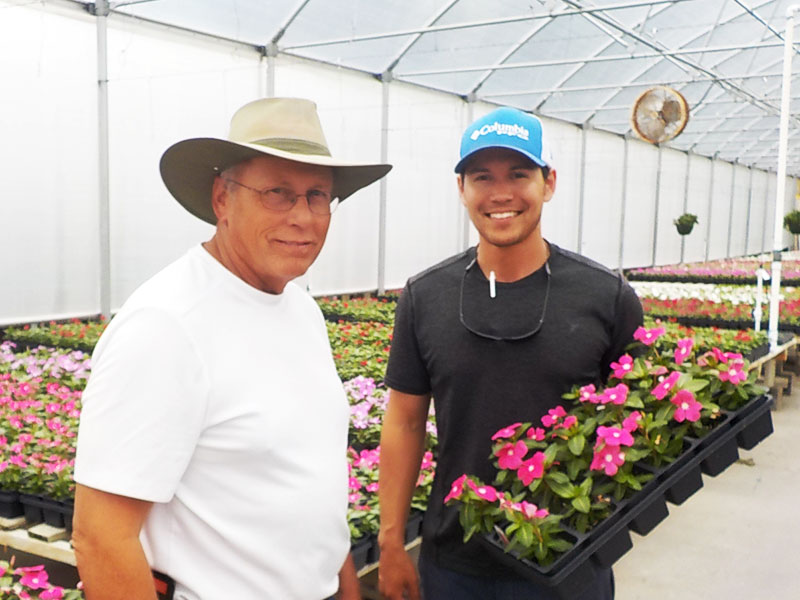 Paul and Justin Brann of Conroe Greenhouse showing one of their many color crops that they have become known for.

After years of working for other greenhouse operations, Paul Brann and his father J. D. opened Conroe Greenhouses in 1974 which is located just north of Houston in Conroe, TX.  However, Paul found that both the quality and quantity of his water supply was decreasing as the population in the area increased; so, in 1996 they decided to move the growing operation further north.  While retaining the Conroe Greenhouse name, their current location is outside New Waverly, TX.  After earning his degree and working as a mechanical engineer, Paul’s son Justin returned to the family business in 2011 and took on many of the growing responsibilities.

Along with Paul and Justin there are six other family members working at the greenhouses, primarily in sales positions.

Production of bedding and color crops

Today, Conroe Greenhouses consists of more than 300,000 sq. ft. of greenhouse production with another 50,000-sq. ft. of outside growing space for the exclusive production of bedding and color crops. Paul says they are known for having the largest variety of bedding plants and color crops in the area. When asked how many different varieties and colors they grow, Paul said he wouldn’t even come close with a guess.  The primary container sizes supplied to independent garden centers, landscapers, and municipalities are 4” to 1 gallon as well as hanging baskets.  They briefly sold to big box stores in the 1990’s but stopped when pay-by-scan reduced profits.

According to Paul, one of his major challenges is finding and keeping quality personnel.  Their operation offers benefits including 401(k), profit sharing and bonuses to retain the best people possible.  The benefits have helped retain employees, some who have been with the company for years, but as these long-term employees retire, younger people are not coming in to fill the positions.

Another challenge for the operation is the low profit margins in the Houston area.  According to Paul the retail prices in the area are at the same level as in 1985. It has only been through increased efficiency and stagnant input costs that have allowed them to continue to thrive.  In 2012, they switched from using 3.8 cu ft. bales to using 135 cu ft. Mega Bales.  By switching to the larger format, 2 employees were freed up to perform other duties.  Justin said if there was an even larger format they would be the first to adopt it. Paul says that in the 1980’s it wasn’t unusual for greenhouse growers to “dump” 15-20% of their crop.  Now, with better growing techniques and management, the “dump” rate for greenhouse crops is less than 5%, again helping to offset the decrease in margins.

What does the future hold?

For Conroe Greenhouse, it may include expanding the product mix to include tree and shrub production in the next year or so and possibly in a few years opening a retail facility at the production location.  Paul says they have seen a 10% increase each year for the past several years of homeowners coming out to the greenhouses to buy direct from the grower. There may be an opportunity to increase profit margins by selling direct to the public.

Paul feels the industry has come full circle and that independent garden centers are now beginning to expand and regain part of the market share lost to the big box stores as customers recognize the value of quality over price.

We thank the Brann family of Conroe Greenhouse for their support and wish them the best of success.