When potting in a greenhouse, the growing media used can have a major influence on crops. There are some common questions or issues growers have concerning their soil. Here is a summary of 10 must-know regarding growing media in the industry. 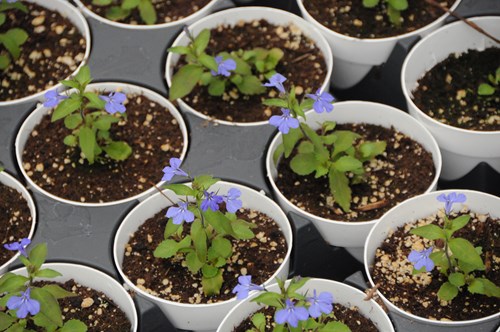 1. Use growing media shortly after blending or delivery

Growing media does not go bad, but changes do occur with aged product. Changes include draw-down of certain nutrients (if the blend has a starter nutrient charge), activation of limestone and decreased effectiveness of the wetting agent. For example, wetting agents can be consumed by native microorganisms found in the growing media components and can chemically degrade.
Microbes in the growing media can potentially consume the fertilizer charge, especially nitrogen and iron. This may explain why crops planted in aged growing media get off to a slower start. These processes occur more rapidly with hot storage temperatures than with cold.

2. When switching to a new growing media, expect to water differently

The most difficult change to overcome is the water requirements. Select a growing media that has similar watering characteristics to what is currently being used. Having the same appearance when it dries out is also ideal, as many growers use the color of the growing media to determine when to water.

Other considerations when switching include:

3. Most growing media contains a starter fertilizer charge that is designed to help with initial plant growth

Once in use, it generally lasts about one to two weeks, depending on the rate the manufacturer incorporates, how much water is applied to plants (volume divided by frequency) and plant uptake. If you are unsure of the fertilizer content, check with the growing media manufacturer for fertility levels. Some growers prefer to water in with a water-soluble fertilizer immediately after planting with about 100 ppm of nitrogen, while others prefer to wait a few weeks. This is a personal preference. However, if you water in immediately, you should adjust the fertilizer level of the growing media. This will account for any imbalances or loss of nutrients in the growing media as a result of product aging.

Limestone is added to neutralize the acidity of peat to raise the pH from 5.5 to 6.2. Limestone is a rock and needs time to break down from the moisture in the growing media. The pH is adjusted with calcium and dolomitic lime, minerals requiring about three weeks to fully react. Dolomitic lime will need more time than calcium lime to react. Depending on the moisture content of the substrate, the reaction time of the lime can change. The drier the growing media in storage, the longer this will take. To get the true starting pH of fresh, unused growing media, take a sample of unused mix, saturate it with deionized water to make a paste and let it sit inside a plastic bag. Take pH readings at day one, day three and day seven to verify the pH rise to the normal range.

5. Occasionally, mold can be seen growing on the medium surface

No need to panic. These molds are saprophytic, meaning they use dead plant material such as bark, compost, peat moss or coir to get their carbon source. They occur more frequently on composted components such as bark. They do not harm plants. These molds often require high humidity and stagnant air to survive. Typical greenhouse environments and nurseries are generally too dry and have high airflow, so these molds rarely come back.

6. In rare cases, offensive odors can come from the growing media

This is especially true for bulk products that have been sitting for a while and products sealed in plastic packaging. It generally does not occur in all packages within a shipment. The odors are from by-products of anaerobic microorganisms naturally found in the organic component of the growing media, such as bark or peat moss.

When the package is opened and oxygen is introduced, odors tend to dissipate within a few days. The presence of oxygen shuts down anaerobic microorganisms, so they no longer produce odor-causing by-products and the odors do not come back. Any by-product causing the odor evaporates easily and leaches when the growing media is watered.

7. Using the wrong media can cause uneven growth

Crops sometimes grow unevenly. When this can be seen throughout the entire crop, it creates a wavy appearance. This is particularly true for seedlings in multi-seedling trays and the cause is uneven starter charge content in the growing media. The easy solution is to apply the appropriate fertilizer at the recommended rate right after seeding (at 25-100 ppm of nitrogen) or transplantation. Verify that the correct amount of fertilizer is added to the stock tank and that the injector is working properly.

Uneven growth could also be caused by variation in the size of growing media components from one container to the next. Either the unused growing media was manufactured this way or it was caused by excessive fluffing with a bale breaker or soil mixer.

8. Change your mix if your growing media does not dry out

The growing media slowly dries out early in the crop cycle when the weather is cool and the plants are small. If this is a recurring problem, consider a high-porosity or bark-based growing media that dries out more rapidly.

Increased airflow through the plant canopy can also help. Achieve this result by installing horizontal airflow fans. This will move stagnant, humid air out of the plant canopy and replace it with drier air found above the canopy. Avoid growing plants on the ground and place them on benches where the air is warmer and airflow is better. If possible, reduce the number of hanging baskets above the crop. These baskets shade the crop and produce more humidity.

9. Algae may form on the top of the growing media

Algae can come from a number of sources, but the most common source is the irrigation water. Surface water sources, such as ponds, lakes or rivers, have the highest concentration of algae, but even sources from wells and municipalities contain algae.

Algae needs light, nitrogen and water to grow. You cannot take away light and nitrogen, as this compromises crop quality, but you can limit the time that the growing media surface stays wet. Algae growth can be discouraged by allowing the growing media surface to dry out between waterings. Other controls include selecting a growing media that dries out more rapidly or completing surface drenches with peroxide-based pesticides.

10. Every greenhouse operation has a certain population of weeds that end up in a crop

Sometimes there are a lot of weeds in greenhouses. Growers often blame the growing media, but sphagnum peat moss has few, if any, possible weed seeds.

Consider the environment in which it grows. Peat bogs are aquatic, very acidic and have low plant-nutrient content. Weeds do not grow in these conditions. Generally, weeds originate inside or around the greenhouse. Weeds produce seed in the summer and fall when houses are open or weeds are allowed to grow under benches. The weed seeds can settle on potting benches, fan jet tubes, vents, exhaust fans, benches, etc. If supplies are stored outside, weed seeds can adhere or blow into containers and growing media packaging.

To keep weeds from getting into future crops, make sure to remove all weeds growing around the greenhouse property. This keeps them from going to seed. Remove any weeds that sprout inside the greenhouse, whether they are under the bench or in the crop. Keep the greenhouses clean and weed issues in the crop will be reduced or eliminated.