Ritter Greenhouse, located just outside St. Louis in Bridgeton, MO, was started in 1966 by Lawrence and Jennie Ritter as a small greenhouse operation growing vegetable transplants used solely on the Ritters' family farm. Flooding from the Missouri river in 1973 changed all that.

Located just south of the Missouri river, Larry Ritter was afraid he was going to lose his vegetable starts to the rising water and decided to move the plants to higher ground in the front yard of his home. When neighbors noticed all the flats of vegetables out front they began asking if they could buy them for their gardens. Thus began the construction of commercial greenhouses on the property in which to grow plants for sale, and by 1995 eliminated the need for any field production at all.

Over the years, the product mix has evolved from mainly vegetable crops to bedding plants which are marketed to independent garden centers and landscapers. In an effort to even out the sales season, the newest area of development at the greenhouses is the production of hydroponic vegetables for sale to local restaurants and grocery stores. 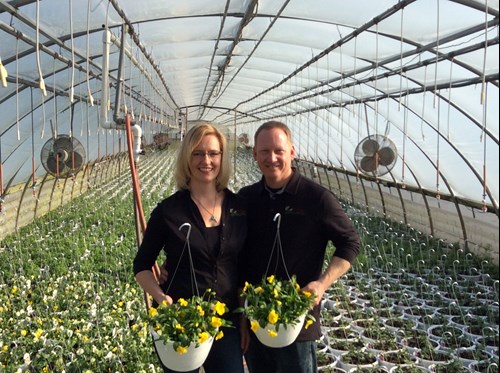 “Christine and Scott Mason, the current owners of Ritter Greenhouse,
show off some of their pansy baskets.”

Larry Ritter’s daughter, Christine, started working at the greenhouses when she was ten years old. These days Christine Ritter Mason owns the greenhouses, and she and her husband Scott have focused on growing the business through a strong teamwork approach. In the past, management positions were filled by family members and the employees were generally friends and acquaintances. While many were fine employees, it wasn’t always a perfect arrangement. In 2007, Christine decided to take a more professional approach and look outside of the family for management personnel and also focus on employee development. The emphasis became “find the person with the right character and passion and teach them the greenhouse business”. This focus on growth and mentoring has resulted in a system for upward advancement for all levels of employees. 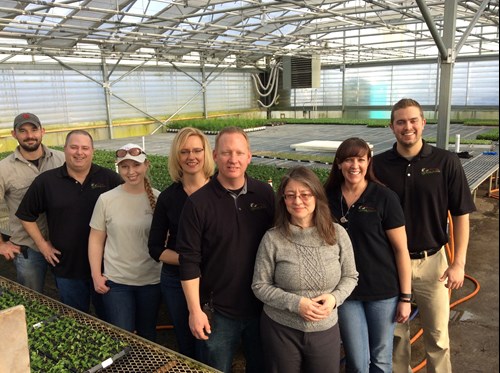 As sales increased, the need for a more efficient production process also grew. The answer lay in the development of a system which tracks production scheduling from the moment plugs arrive (or the seeds are sown) until the product is delivered to the customer. The system includes an on-line order  entry function that ties crop location within the greenhouses to customers' orders resulting in an 80% increase in efficiency in filling those orders. The on-line order entry process gave rise to the concept of computer-based marketing so that today, Bob Glover, the Director of Business Development, says the company is focused on digital networking and generating a spirit of innovation in all aspects of the business.

Another example of steps taken to increase efficiency at the greenhouses was to switch from using the 2.8 cubic foot bags of PRO-MIX and investing in a bale buster with which to process the 135 cubic foot bales of PRO-MIX. This greatly decreased the time spent filling the potting machine and allowed for faster planting. Christine has been using PRO-MIX BX for years and recently began using PRO-MIX BX BIOFUNGICIDE™ + MYCORRHIZAE™. As Christine says, “the fact we have been using PRO-MIX for years with no problems says it all about the quality and consistence of the mix as well as customer service.”

*All BIOFUNGICIDE™ products are available under BIOSTIMULANT in Canada and in Latin America.

When asked where they expected the business to be in ten years, the consensus is “who knows what the future will bring but we plan to be here”.

The Premier Tech Horticulture team would like to wish Christine and Scott Mason continued success and thank them for their loyal use of our PRO-MIX products.